skip to main content
Return to Fordham University
You are at:Home»Politics and Society»A Call to Arms for Vanishing Religious Minorities
Yazidi refugees crossing the Iraq border.(Courtesy Al Akhbar)
Religious minorities are disappearing from the Middle East at an unprecedented clip. Yet western powers are paralyzed to speak about it, let alone aid them in their struggle, said experts at two events held at Fordham’s Lincoln Center campus.

Klaus Wivel, the author of The Last Supper: The Plight of Christians in Arab Lands (New Vessel Press, 2016), spoke on April 29 as part of the International Institute for Humanitarian Affairs’ (IIHA) spring lecture series.

He detailed an exceedingly grim situation for Christians in four Middle Eastern countries—Egypt, Iraq, Israel, and Lebanon. In 1910, the entire region was only 10 percent Christian to begin with, but it’s now dropped to 4 percent, he said, offering some statistics: 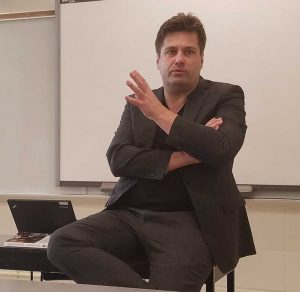 Iraq’s Christian community, one of the oldest in the world, has been decimated the most, he said. Christians were seen as being allied with the American and European forces that ousted Saddam Hussein, so they were attacked, their churches were bombed, and their priests were killed in large numbers. By 2007, experts estimate that two-thirds of a population of 1.5 million had fled the country, he said.

“That was by far the largest group of people immigrating from Iraq,” said Wivel, a native of Denmark. “I thought this [would]be an enormous story, but it wasn’t.

He said the fact that more news outlets ignored the exodus baffled him, because “every major newspaper has a foreign correspondent in Jerusalem” and the Middle East.

The biggest culprit in Christians’ dwindling numbers is the rise of Wahhabism, an intolerant strain of Sunni Islam that is practiced in Saudi Arabia, he said. Its influence can be felt in Egypt, where a 2010 survey found that 80 percent of the population said a Muslim who converts to another faith should be killed. In Iraq, ISIS has killed and enslaved Christians and Yazidis (members of an ancient monotheistic religion that believes in a god and seven protective angels) by the thousands.

Wivel said it’s clear these are violations of Article 18 of the United Nations Declaration of Human Rights, which all Mideast countries—but Saudi Arabia—have signed.

The U.S. State Department has known about this, but it doesn’t want to be seen as forcing Christianity on that part of the world, he said. The United States is also leery that calling attention to it will attract even more attacks.

While these are all valid points, the time for silence is over, he said.

“Even though we did not talk about this, the Christians became targets [so much that]in Iraq, there are hardly any left. So our silence didn’t really help them,” he said.

On May 11, a second event held by the Center on Religion and Culture and the Orthodox Christian Studies Center put a particular focus on religious minorities and Iraq. While much of a panel conversation focused on Christians, it also touched on the fate of the Yazidis.

Two of the panelists brought firsthand experience of the crisis; they unflinchingly labeled the situation “genocide.”

Haider Elias, founder of Yazda: A Global Yazidi Organization, said that the Yazidi, who once numbered in the millions, are now less than a million in the world. He said many have migrated to Russia, Armenia, and Georgia. Iraq was once home to 90 percent of the Yazidi, but since 2014, 20 percent have migrated to refugee camps.

He traced long history of Yazidi massacres: from the Ottoman Empire in the late 19th century to the Yazidi fight alongside Armenians in the 1920s to the current crisis. 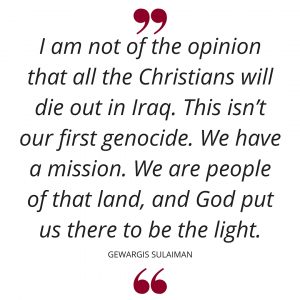 Through Yazda, Elias lobbies politicians from around the globe to bring attention to the killings. The group has helped more than 1,000 women who have escaped enslavement—some of which takes place in open markets, with the women chained to each other. Given the tumultuous history, many young Yazidis don’t want to return to the region.

“This is not the first, second, or third time,” said Elias. “Their fathers have been telling them the stories of attacks for centuries.”

Like the Yazidi, Assyrian Christians have been settled in Iraq for millennia. Father Gewargis Sulaiman, of the Assyrian Church of the East, said that his people were among the first to hear the message of Jesus from St. Peter. He said the Assyrians’ love of science, philosophy, and culture has left “an irrefutable mark on the Middle East.” Like the Yazidi, they too are being killed by the thousands and abandoning the area. Yet, Father Sulaiman has hope.

“I am not of the opinion that all the Christians will die out in Iraq,” he said. “This isn’t our first genocide. We have a mission. We are people of that land, and God put us there to be the light.

“These are human beings, … not museum pieces,” he said, paraphrasing a fellow priest in Iraq. “And when the world stands by and watches any peaceful people disappear, we all suffer.”

Tom Stoelker contributed to this article.