skip to main content
Return to Fordham University
You are at:Home»Campus Locations»Writers Bound by Faith Tradition Gather at Fordham
Alice McDermott addresses an audience at Pope Auditorium as part of the panel “Irish Incarnations of the Catholic Imagination”
Poets, novelists, playwrights, memoirists, and others moved by the power of the written word to communicate the deepest human truths descended upon Fordham’s Lincoln Center campus for a three-day long literary conference.

“The Future of the Catholic Literary Imagination,” held from April 27 to 29, drew 375 attendees for panel discussions, workshops and keynote addresses by writers Dana Gioia, Ron Hansen, Mary Gordon, and Alice McDermott. At the heart of the conference, sponsored by Fordham’s Francis and Ann Curran Center for American Catholic Studies, were focuses on the works of writers and presenters from New York City and Fordham, and an emphasis on the Ignatian and Catholic imaginations.

In a Friday panel, “Irish Incarnations of the Catholic Imagination,” McDermott, Kathleen Hill, Michael O’Siadhail, and Peter Quinn tackled the ways in which the Emerald Isle’s deep ties to Catholicism could be felt in their work.

Quinn highlighted the way that Irish-American Catholics’ attitudes were shaped by their role as scapegoats as recently as the early 20th century. He said his first introduction to Irish Catholic literature came via Elizabeth Cullinan’s House of Gold, (Houghton Mifflin, 1970). The book, which delved deep into the personal stories of East Bronx Irish Catholics, was seen as a betrayal of the tribe in its scorching portrayals.

“My parents were educated people, both college graduates, but their reaction [to the book]was my introduction to the code of silence, the Irish version of Omertà,” he said.

Some of this was understandable; after all, the arrival in New York of one million people—one-eighth of the Irish population—between 1845 and 1855, made the Irish immigrants prime targets, he said.

“Critics debated whether it was Catholicism that made the Irish ignorant and stupid, or it was their stupidity and gullibility that made them Catholic,” said Quinn, noting the anti-Irish sentiment. 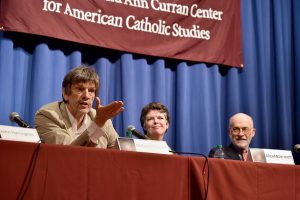 But as prime targets of criticism, no other ethic group better understood the gift of faith, said McDermott. While it was said in jest that the Irish could learn about ambition from the Jews, about food from the Italians, and about self-discipline from the Germans, being Irish was still the best, because it was the Irish who had Catholicism right.

“I was told, you might not want an Irish doctor, and certainly not an Irish lawyer, or an Irish chef. You might not even want some Irish guy painting your house, but there was no better priest than an Irish priest,” she said.

“I was taught that ultimately it was best not to identify with your ethnic origins,” she said, “But with the one faith that is willing and able to forgive us all for our many inevitable human failings. It’s a faith that both forgives us and more remarkable still, offers us eternal life despite how annoying we all are.”

On Stage and Screen

Fontana, who went to a Jesuit high school and later attended a public college, said it was his departure from religious schooling that helped him realize the importance of his faith. 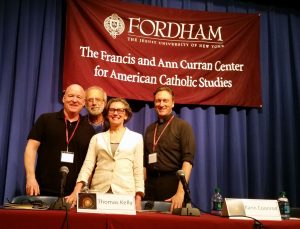 “I had this discipline from the Jesuits, and this wonderful freedom during the sixties,” he said. “I was able to find a place for the two to live together within my soul.”

He said that when he began working in television, his writing was nearly all faith-related. In his HBO drama series, Oz, he used a prison setting to tell stories of redemption and retribution in a place that offered so little of it.

“Our mantra on Oz was: If you could find God in a prison, he must exist,” he said, adding that in his stories he prefers to raise questions of morality rather than to preach.

For Kelly, who said he was raised Catholic but later became agnostic, it was a slow transition back to the appreciation of his faith. After his father’s death, Catholicism began to seep back into his life.

Kelly said he began to realize that all of his main characters were Catholic. On his television series, Blue Bloods, he noted that he focuses on situational morality.

“The individuals in these stories are striving to do good, and some of them are very conflicted about not being able to do good,” he said.

Coonrod, the founder of the Arden Party and Compagnia de’ Colombari, two New York-based theater companies, said she brings her own religious imaginings to a live audience through literary interpretations. She once asked a light designer to create a literal interpretation of the birth of Christ as “the light of the world,” creating a scenario where the actress playing Mary appeared to cradle light. “Is it a baby? Is it a cloth that comes undone? Or is it actually light?” Coonrod asked, noting how theater can stimulate our religious imaginations.

The conference was a follow-up to the first Catholic Imagination conference at the University of Southern California held in spring of 2015.

Angela O’Donnell, conference organizer and associate director of the Curran Center, noted the timeliness of this year’s conference, saying writers were “never so relevant as we are now.”

“In any given culture, writers are the designated truth-tellers, as well as the repository of memory,” she said. “Every era needs its writers to remind people of their core values and hold us to exacting standards of thought and action.”
Angie Chen contributed reporting 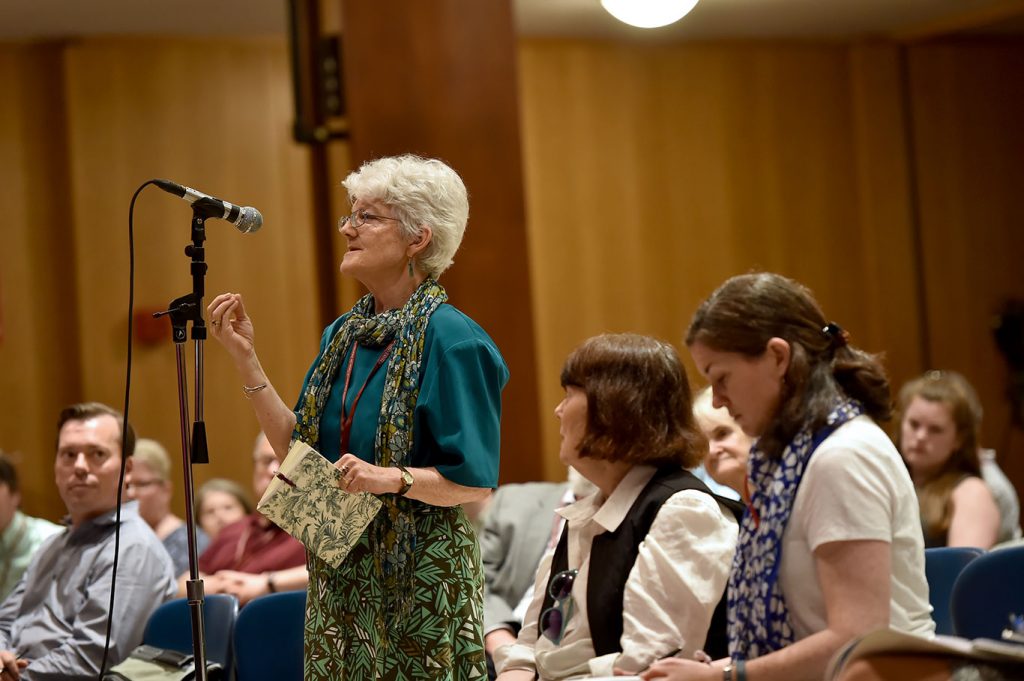 In addition to keynote lectures, the conference featured 20 panel discussions and readings spread over three days.
Photo by Dana Maxson