skip to main content
Return to Fordham University
You are at:Home»Inside Fordham»World Youth Day 2013 : Embracing Magis on the Road to Rio 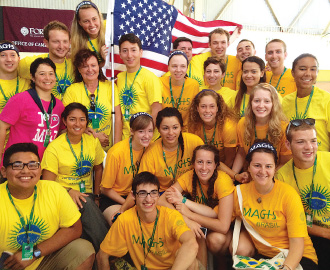 Members of the Fordham delegation prepared throughout the academic year for their trip to Brazil, where they met and traveled with students from several other nations.
Photos by John Gownley

All eyes were on Rio de Janeiro, Brazil, this July, when a newly elected Pope Francis encouraged 3 million young people to use their Catholic faith and friendship with one another to build a more tolerant and just world.

For a Fordham delegation of 14 students and two campus ministers, the pope’s message, along with the 17 days of prayer, music, service, and cultural events at World Youth Day (WYD) and Magis 2013, were worth the months of preparation and fundraising it took to get there.

The delegation’s twofold journey began in the city of Salvador da Bahia, the site where the Society of Jesus arrived in the Americas in the 17th century. There, the group participated in Magis 2013, an Ignatian pastoral experience that brings together members of Jesuit institutions from around the world. Magis, which takes its name from the Jesuit phrase meaning “the more,” is held in the days leading up to each WYD.

After convening in Salvador, the group broke into small theme-based immersion experiences, which ranged from volunteering at a children’s center to visiting an urban eco-park in a Brazilian favela.

Fordham College at Rose Hill junior Patrick Cahill joined students from Argentina, Uruguay, and the islands of Mauritius (located off the southeast coast of Africa) for a 73-mile pilgrimage across Brazil.

“We relied totally on the generosity of the people we met,” Cahill said. “They fed us, gave us a place to sleep, opened their homes to us. And we eventually realized that the food they were making for us was all they had.”

Trekking across the rugged terrain, Cahill said, helped highlight the commonalities about the diverse group, which spoke English, Spanish, Creole, and more.

“It was powerful to see that despite language barriers, we were united under a similar way of thinking—looking at the world through an Ignatian lens,” he said.

Later that week, the Fordham delegation joined millions of their peers in Rio de Janeiro for the WYD festivities. The group even caught a glimpse of Pope Francis as his motorcade passed by the Jesuit college where they were staying. Students reported that the pope periodically got out of his car to embrace people on the street.

“We had talked so much about Jesuit spirituality during Magis, so to see the pope putting it into practice was inspirational,” Cahill said. “This whole experience has taught me how Ignatian spirituality can mold the entire way you experience the world, especially seeing God in the people you meet.”

Although the delegation could not attend the closing Mass on Copacabana Beach, they watched live from the airport as the pope told the crowds, “The church needs you, your creativity, and the joy that is so characteristic of you.”

“He embodies magis,” said Fordham College at Lincoln Center junior Deborah Adewale. “He thinks about what’s best for the people of the church. I feel his attitude makes people listen to him.”