skip to main content
Return to Fordham University
You are at:Home»Campus Life»University President Calls for a Reflection on Racial Injustice 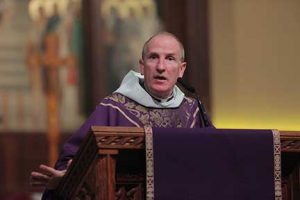 Conspiracies of grace will help the country overcome the hatred that has roiled the United States in recent months, Joseph M. McShane, SJ, president of Fordham said in his sermon on March 1.

“The challenges we face in the area of race relations are not nearly or even primarily political or social or economic. No, no. They are social and moral challenges on both the personal and social levels,” he said from the pulpit at the University Church on the Rose Hill campus.

“And if they are moral challenges and moral issues, then to confront, reflect and address them, we have to reflect on them in the court of our own hearts.”

Sunday marked the beginning of a week of reflection on race relations in America at the University, and Father McShane used a question posed by St. Paul in the second reading of the day to delve into the issue. If God is for us, St. Paul says in a letter to the Romans, who can be against us?

“If you’re anything like I am, whenever you hear that line, I want to say ‘Do you have a few hours? I have a few names. In fact, I have a lot of names,’” Father McShane said.

In fact, he noted, we conspire against ourselves when we engage in behavior that blocks God’s love, and do “stupid, hateful things that frustrate his dreams for us.” Generalizations and stereotypes are “sinful ways of thinking” that not only disvalue others, but also make us slaves ourselves.

“In the aftermath of the events and incidents that occurred throughout our country and in our own city in the course of the last few months, we can and do rail about unjust social systems, and with good reason,” he said.

“Let us make no mistake about it. There are unholy sacraments of evil all around us–outward signs of cruelty and inhumanity that evil creates–with which we live and to which we sometimes contribute. So we should rail against injustice.”

Fortunately, the story of Jesus’ transfiguration (detailed in a section of the Gospel of Mark that was part of Sunday’s Mass) provides some guidance, Father McShane said. In the Gospel, Jesus and three of his apostles go to a mountain, where the prophets Moses and Elijah appear next to him. Jesus becomes engulfed in light and is and is then addressed as “Son” by the voice of God above. 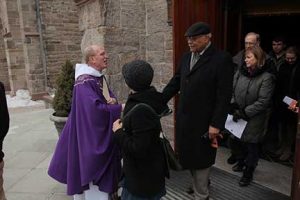 Three aspects of the Gospel stand out, Father McShane said.

-As we witness Jesus in all his glory, we are invited to see the sacrifice that God made for us.

-The Transfiguration reveals the destiny that God has in store for us.

– Since we are all parts of the Body of Christ, we must do as Jesus did: bear the cross and throw ourselves into the work of redeeming the world.

“We as Christians carry in our hearts this dangerous, disturbing but saving realization that in God’s eyes, there are no strangers, in God’s heart, there are no enemies,” he said, noting that we should strive for a just world, that is filled with charity, peace and dignity.

“Let us remember always that the world is not transformed by the force of arms, but by conspiracies of grace, entered into those who are converted,” he said.

Several events are scheduled to take place during the week of Reflection on Race Relations in America at Fordham.