skip to main content
Return to Fordham University
You are at:Home»Living the Mission»University Mourns Death of Daniel Berrigan, SJ, Peace Activist and Poet-in-Residence

Fordham University mourns the death of Daniel Berrigan, SJ, whose fervent and unwavering devotion to the cause of peace drove him and his younger brother Philip to engage in more than four decades of civil disobedience.

Father Berrigan, Fordham’s poet-in-residence since 2000, died at the Jesuit residence Murray-Weigel Hall on April 30 at age 94. He was an accomplished poet and co-founder, along with his brother Philip, of the Plowshares Movement, an anti-nuclear and Christian pacifist group. 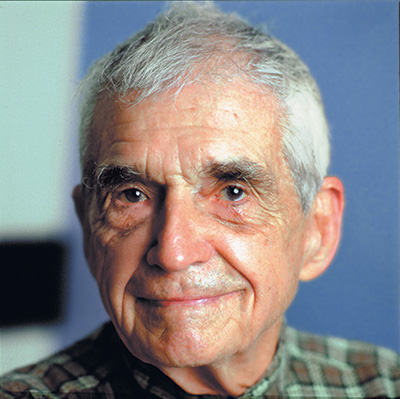 In 2003, Father Berrigan was the subject of a Fordham Magazine article written by alumnus Jim O’Grady, author of Disarmed and Dangerous, a book about the Berrigan brothers.
Photo by Peter Freed

“Dan Berrigan was a giant among us. Whatever one makes of his methods, his lifelong pursuit of peace and justice was both heartfelt and critically important,” said Joseph M. McShane, SJ, president of Fordham.

“He belongs not just to the Jesuits, but to a significant period in American history. His activism came from a poet’s heart—and indeed he was always a highly accomplished poet, a poet who drew his inspiration from the Prophets and the Gospel. His fluency never failed him, and we were blessed to have him for so long as Fordham’s poet-in-residence.”

The Plowshares group was active throughout the 1960s and 70s, and gained notoriety in 1968 when the Berrigans and seven others used homemade napalm to burn draft files in the parking lot of a U.S. Selective Service Office in Catonsville, Maryland, in protest of the Vietnam War. Father Berrigan was convicted of destroying government property and received a three-year sentence in federal prison.

In 1980, the Berrigans and six others broke into a General Electric nuclear facility in King of Prussia, Pennsylvania, damaged nuclear warhead nose cones, and poured blood on documents in the facility. Their arrest and the legal battles that followed were chronicled in the 1982 film In The King of Prussia.

From 1970 to 1995, Father Berrigan spent an estimated seven years in prison for his peace activism, which included protests against the 1991 Gulf War, the U.S. invasion of Afghanistan, and the 2003 invasion of Iraq. In June 2012, he lent his support to the Occupy Wall Street movement with a visit to Zuccotti Park. 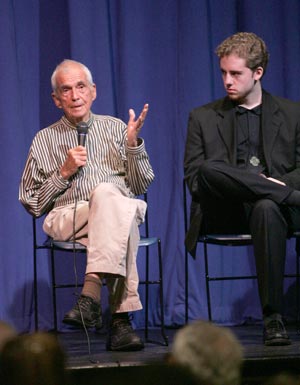 In September, 2007, Father Berrigan discussed his activism during the Vietnam War era with new freshman students at Fordham.
Photo by Bruce Gilbert

Father Berrigan was born in Virginia, Minnesota, in 1921, and entered into the Society of Jesus directly out of high school in 1939. He was ordained in 1952.

In addition to his activism, Father Berrigan was lauded for his writing. His first poem appeared in America Magazine in 1942 while he was a student at the Jesuit seminary St. Andrew-on-Hudson. His first book of poetry, Time Without Number, (The MacMillon Company, 1953), won the Lamont Poetry Prize in 1957. In all, he wrote more than 50 books and various articles and commentaries.

At the request of Father McShane, in 2006 Father Berrigan penned Ordina questo amore, O tu che m’ami: Recitative for Four Voices; Ignatius, Francis Xavier, Peter Faber and Chorus, timed for the Jesuit Jubilee Year. The 2007 performance piece, which was was set to music by  composer Elizabeth Swados, celebrated the genesis of the Society of Jesus, which was founded in 1541 by St. Ignatius Loyola, Francis Xavier and Peter Faber.

Robin Andersen, PhD, professor of communications and former head of Fordham’s peace and justice studies program, said Father Berrigan ran seminars for Fordham faculty on how to teach peace, and also taught courses for students such as Poems by Poets in Torment.

She said that he provided great comfort to students whose faith in peace was shaken by the events of 9/11.

“There were calls to bomb Afghanistan, and I remember one of his students asked him, ‘How can you still have a peace attitude after this?’ Father Berrigan told him ‘Well you know, being a peace activist between wars is kind of like being a vegetarian between meals,’” Andersen recalled.

His writing and activism occasionally intersected, as in The Dark Night of Resistance (Doubleday & Company, 1971), which he wrote in 1970 while he was in hiding from the FBI on federal charges.

In interviews, Father Berrigan credited Dorothy Day with piquing his initial interest in antiwar activism. He said, while he was teaching at Brooklyn Preparatory School, Day had sent a student pacifist to him who sought instruction in the Catholic faith and peace. The musings of John Cuthbert Ford, S.J. on the morality of saturation bombing—such as the firebombing of Dresden in World War II—further convinced him to oppose war.

In a 2012 interview for Faith, Resistance, and the Future: Daniel Berrigan’s Challenge to Catholic Social Thought (Fordham University Press 2012), Father Berrigan was asked to reflect on how things had changed in the 44 years since his arrest for the Catonsville event.

“The mass[es]of our people are victimized by politics and by the media,” Father Berrigan wrote. “We are called to be sensible and realistic about the state of our world without being completely absorbed into it, so that we have nothing to say about it, nothing to do about it.”

“I think, if we stop with just the analysis of how bad things are, we miss the point of the Gospel, which is saying to us in various ways [and]in all sorts of ways what is to be done.

“One is called to live nonviolently, even if the change one works for seems impossible. It may or may not be possible to turn the U.S. around through nonviolent revolution. But one thing favors such an attempt: the total inability of violence to change anything for the better.”

Donations in his memory may be made to the Fr. Daniel Berrigan, SJ Fund for Social Ministries, Jesuits USA Northeast Province at sjnen.org/donate. The Province has also has created a memorial Peacemaking Fund, which will directly support peacemaking efforts at a wide range of Jesuit works along the entire eastern United States.