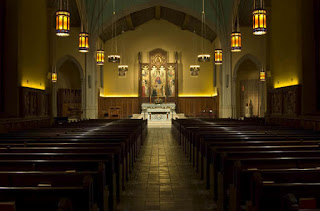 The relighting of the University Church was honored on June 27 with a 2012 Illuminating Engineering Society Award of Merit.

The project, which was overseen by Brooklyn-based Studio T+L Theatre Consultants + Lighting Designers, aimed to increase light levels throughout the church, install additional lighting to give the architecture greater presence, replace the aging control system, reduce energy consumption and increase the lighting flexibility in the sanctuary.

Phase one of the project, which was completed in the summer of 2010, involved replacing the old dimming system, replacing the lamp arrays in the pendant lights, and adding the LED uplights grazing the walls of the church, which was built in 1845. 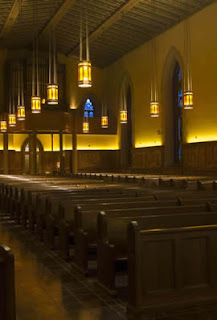 The second phase, which was completed in the summer of 2011, saw the replacement and supplementing of the lighting in the sanctuary and new fixtures illuminating the statuary at the ends of the east and west transepts.The final phase, which is currently underway, will provide new light for the organ that is currently being installed.

The project was evaluated based on the complexity of problem, the lighting concept; architectural integration, originality, performance criteria, visual comfort, energy and environmental design implementation, budget restrictions and ease of maintenance.

In addition, the design was also one of 58 that received a score high enough to qualify for a second, higher level award that will be presented in November.