skip to main content
Return to Fordham University
You are at:Home»Inside Fordham»Two Authors Make the Case for a Good Funeral
Alice McDermott (right) and Thomas Lynch share a laugh discussing death.
In what amounted to a rebuke of the growing “Celebration of Life” funereal trend, authors Alice McDermott and Thomas Lynch made the case for the “good funeral” at an event sponsored by the Center on Religion and Culture on Oct. 15.

McDermott is a National Book Award-winning novelist and author of Charming Billy, and Lynch, an undertaker, poet, and essayist, and author of The Good Funeral: Death, Grief, and the Community of Care, spoke at “Unto Dust: A Literary Wake.”

Instead, the authors took a decidedly Irish Catholic perspective on the subject, citing a culture famous for its wakes. Lynch described old-country traditions where the recently deceased is laid out on the kitchen table or in bed. There, the family gathers to receive neighbors, the priest, and, eventually, the undertaker. There, also, tales are told.

He laid out the corpse’s eventual journey to the funeral home—which usually has a parking lot located conveniently near a pub—followed by a service at church and final procession to the grave.

“But as I’ve watched over the past 50 years, there’s become a steady estrangement between the living and the dead,” he said.

He called the celebratory trend “funeral karaoke, a Japanese term for empty orchestra” in which the “wince is replaced with the grin” and “everyone is invited except for the dead guy.” 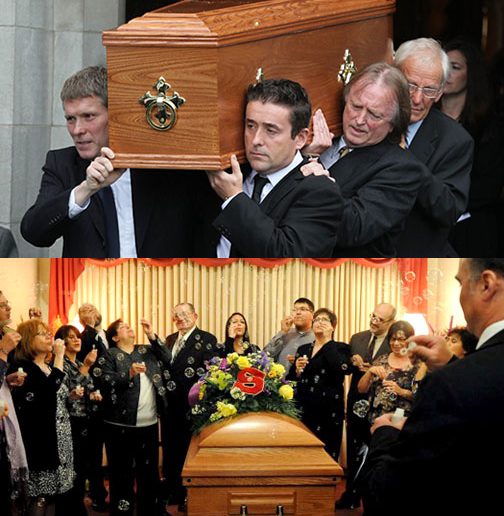 The “good funeral” vs. “funeral light.”

McDermott said that while the prose of the Catholic Church may grow flatfooted in its descriptions of heaven and hell, the sacred texts of the funeral Mass are far better than any other sentiment that even she (who has been shortlisted for the Pulitzer Prize) could write for a funeral.

“For heaven’s sake be silent,” she said. “Let these words speak for you, because your words are going to be temporary and at the end of it you’ll say ‘I didn’t say what I meant to say.’

“Rely on the words that are formed for you. No, they’re not going to be saying exactly what you mean—that’s the point: It can’t be said. Our grief can’t be spoken of. Language fails us if we are seriously confronting life and morality and love. Use poetry, use prayer, and use the customary forms so you can be silent amidst it.”

McDermott said that her children don’t share her point of view. She expressed a general concern for a younger generation that isn’t accustomed to ritual and would rather defer the difficult questions that death raises.

“In contemporary culture there’s a fear of gravitas,” she said. “There’s a move toward more party—let’s not be sad, let’s be glad and stop thinking about it as fast we can.”

The presence of the corpse remains an essential for a good funeral, said Lynch.

“Once you put a dead guy in the room you can talk about anything,” he said. “It ups the existential ante.”

Both bristled the notion of “closure” and “getting over it” and argued instead that grief is a fact of life that is best-handled head on. Thus, turning the funeral into a chance to share cute anecdotes does little to deal with the mysteries of what lie beyond.

Lynch said he often uses two images when describing the difference between a “good funeral” and “funeral light.” One image depicts Seamus Heaney’s funeral with grief stricken faces of the pallbearers and another depicts a Lawrence Welk fan’s funeral, where attendees blew bubbles on the coffin.

At Seamus Heaney’s funeral the pallbearers look “awestruck, desolate, full of wonder, and hurt, whereas the people with the bubbles look like, ‘What comes next?’”