Terrence Tilley, Ph.D., the Avery Cardinal Dulles, S.J., Chair in Catholic Theology and chair of the theology department, was awarded the John Courtney Murray Award from the Catholic Theological Society of America (CTSA), the society’s highest honor, on June 9. 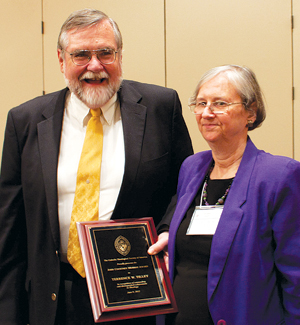 Tilley was recognized at the society’s 67th annual convention in St. Louis, Mo. He received the award from John Thiel, Ph.D., professor of religious studies at Fairfield University and the society’s current president.

“I can think of no one more deserving of the John Courtney Murray Award than Terry Tilley,” said Joseph M. McShane, S.J., president of Fordham.

“In his sober scholarship, collegiality, and measured analysis of matters theological, Dr. Tilley sets the standard for academic theologians. I know I speak for the Fordham community when I say we are lucky to have him as a colleague.”

In presenting the award, Thiel praised Tilley for his administrative work, his teaching, and his scholarly contributions, which include 10 books and more than 60 articles. In his last book, Faith: What It Is and What It Isn’t (Orbis Books, 2010), a textbook, Tilley attempted to better address tensions between religious thought and scientific and historical inquiry.

“Our honoree has shown himself to be a most imaginative Catholic thinker, especially concerned to highlight the pragmatic dimensions of belief and practice often overlooked by theologians who approach the Catholic tradition philosophically only by appeal to metaphysics or through the history of ideas,” said Thiel. “Ever concerned about the theological encounter between the epistemological question of how reason knows and the ecclesial question of how faith believes and acts, his career-long work continues to make an important contribution to theology’s traditional task of faith seeking understanding.”

Tilley, in accepting the award, acknowledged his fond belief that theology is a “team sport.”

“That’s a crucial thing, because it’s not merely that if we don’t hang together, we shall surely hang separately. It’s because as theologians, we are teachers, but we are first learners. We are people who speak, but first we have to listen.

“I have learned from so many in this room from whom I am so grateful,” he said.

Tilley is the 41st theologian to be honored with the award, which is named after the great American theologian known for his work on religious liberty.