skip to main content
Return to Fordham University
You are at:Home»Fordham Magazine»Theology Faculty Weigh in on Papal Resignation

On Feb. 11, Pope Benedict XVI stunned the world by announcing he was resigning as leader of 1.2 billion Catholics, commencing the first papal abdication in six centuries. 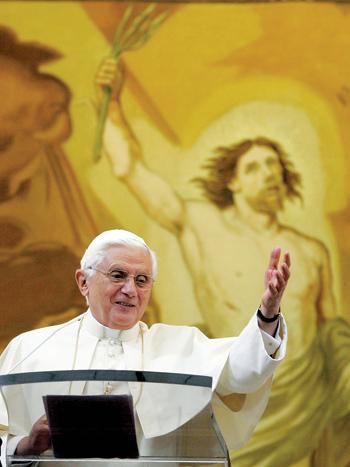 Members of Fordham’s theology faculty have been weighing in on the Pope’s historical decision through live television, news interviews and blog posts:

Terrence Tilley, Ph.D., Avery Cardinal Dulles, S.J., Chair in Catholic Theology and chair of the department: This was a real stunner, but as I begin to think about it, it is not entirely a surprise. Whether you agree or disagree with this Pope… this man has the good of the church at his heart and rather than put the church through a long, extended illness, he has chosen a quick and simple resignation [which also]makes it possible for future popes to have this as a live option.

This act will change the memory of his pontificate. He is remembered for his conservative intra-church concerns and his very progressive views on war and peace issues, economic issues, and green issues. But this symbolic gesture says no servant is bigger than the church.
As far as who will replace him, popes contrast with their predecessors. He’s an academic. We will probably get somebody who’s stronger in pastoral and administrative work. That’s the only guess that makes sense.

Maureen Tilley, Ph.D., professor of theology: What do you do with an ex-pope? What kind of power does he have, especially as we go into the next conclave? Based on the unprecedented nature of his announcement, we don’t have a way that people won’t seek his advice, I’m sure the next pope will seek his advice.
I think the final days of Pope John II really influenced him [as]John Paul II was incapable of exercising his office and probably legally incapable of resigning. Given advances in modern medicine the church could be in a situation of having a pope physically or mentally incapable of executing his resignation—I think Benedict wanted to spare the church that sort of situation.

Joseph Lienhard, S.J.. professor of theology and editor, Traditio: There will be guessing about who the next pope will be. He could be from Europe, he might also be from French Canada or Africa. Cardinal Dolan is one of the 117 electors, but it seems unlikely that he would be chosen: the fact that the United States is a superpower militates against it.
Read more of Father Leinhard’s comments here.

Michael Peppard, Ph.D., assistant professor of theology: As many seasoned observers have already noted, the Catholic Church is about to enter uncharted territory. Relatively few details of what comes next are known. Of all the musings I’ve had, for me the biggest question has been: after Feb. 28, where physically will Pope Benedict . . . reside? And how will his physical presence affect those around him?
Read more of Peppard’s comments here.

See more from Fordham experts on the Pope’s Resignation: