skip to main content
Return to Fordham University
You are at:Home»Inside Fordham»Theologians Weigh In on Newly Revealed Papyrus 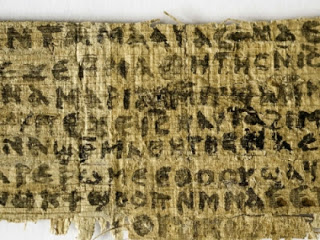 It has been an exciting week for theology professor Michael Peppard.

When news broke on Sept. 18 that Harvard professor Karen King revealed an ancient scrap of papyrus that claims Jesus Christ had a wife, Peppard, as he wrote in this blog post at Commonweal, was “giddy like a child.”

As a reader/teacher of Coptic and trained papyrologist, Peppard settled in to assess the newly revealed papyrus.

“After scrutinizing the wonderfully high-resolution photograph offered in Laurie Goodstein’s New York Times piece, I would like first to commend Karen King of Harvard for the ways in which she has presented this fragment to the world,” he wrote in the blog. “Nowhere in her quotations or the manuscript of her forthcoming article does she engage in the kind of grandstanding that would be so tempting in her situation.”

Peppard was interviewed by a few media outlets. He told the Catholic News Service that a belief in asceticism saw rapid development in the second to fourth centuries, especially in Egypt where Christian monasticism was born.

“The new text published by King may be a sign of early Christians ‘pushing back’ against asceticism and moving closer to mainstream Jewish attitudes ‘of blessing sex and procreation,’” Peppard said.

And in this interview that aired on CBS 2 New York, he said “It has the appearance of a middleman who had one papyrus, wanted money, chopped it up, chopped up to get higher value for resale,”

The interview also featured McGinley Chair Father Patrick Ryan, S.J., who said the papyrus does not prove Jesus had a wife.

”Well, the trouble is that’s all there is,” he told CBS 2’s John Slattery. “’My wife the Church’ could be the next word. We don’t have the next word.  We just have ‘Jesus my wife.’”