skip to main content
Return to Fordham University
You are at:Home»In the News»The Jesuit University of New York Celebrates Pope Francis’ Visit
BELOW: See a gallery of images from the visit.
Millions of eyes were on New York City last week as Pope Francis arrived for the second leg of his three-city visit to the United States. During his brief time in Manhattan the pontiff addressed a wide variety of audiences, ranging from United Nations representatives to third-graders in Harlem.

At Fordham, students from all three campuses gathered to listen to, discuss, and commemorate the historic visit from the first Jesuit pope.

Papal flags flew and “Pope2Congress” bingo cards were distributed on Sept 24, as members of the Fordham community gathered around televisions on all three campuses to watch Pope Francis address a joint session of the U.S. Congress. 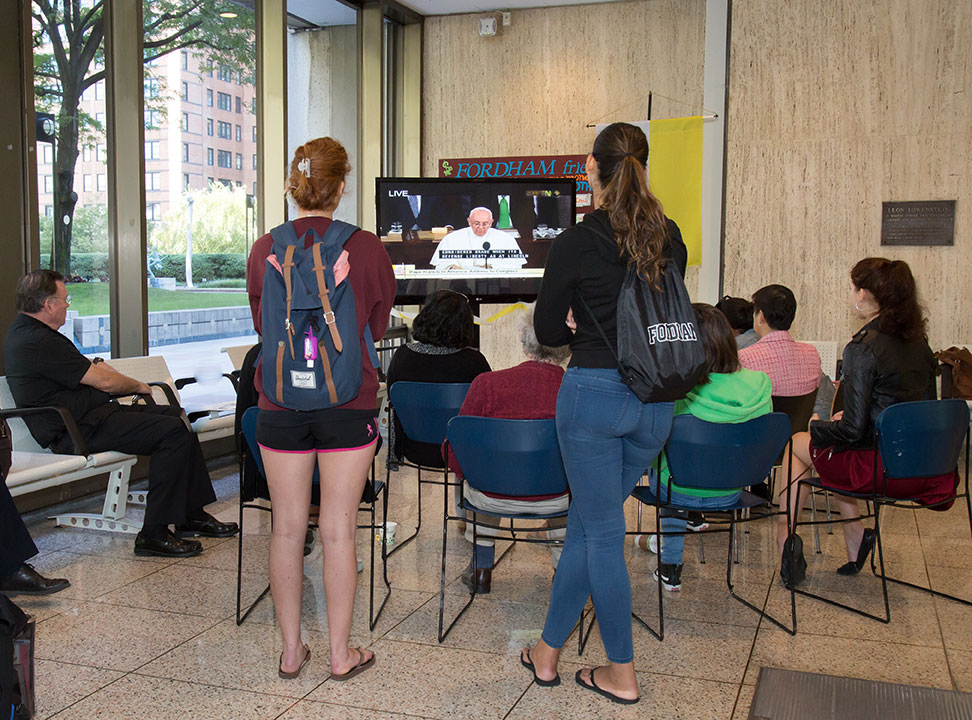 Students watched the live stream of the pope’s address to the U.S. Congress on Sept. 24 on the Lowenstein plaza.
Photo by Patrick Verel

In addition to the lobby in the McGinley Center and Room 228 at the Westchester campus, the address—the first ever for a pope—was broadcast in the plaza-level lobby at the Lincoln Center campus.

The address, in which the pope challenged U.S. leaders on issues such immigration, global climate change, and income inequality, drew both a mix of curious onlookers who lingered at the top of the escalators upon seeing the crowd, and those who listened intently to the hour-long address.

Jamie Saltamachia, FCRH ‘14, GSS ’15, assistant director of the Dorothy Day Center for Service and Justice, was excited that the pope was speaking directly to leaders whose constituents, in many cases, are poor.

“He’s really made an impact on a lot of people and really opened a lot of eyes,” she said.

“People who may have lost their faith years ago are starting to come back to the church, because he is so open minded and has a strong sense of social justice.”

Katie Svejkoski, a first-year English graduate student from St. Louis, said she was pleasantly surprised that Francis called for the abolishment of the death penalty, and was thrilled that he praised Dorothy Day.

Joseph M. McShane, SJ, president of Fordham, was in Washington, D.C. and New York City for the papal events. Read his reflections on the events here.
“She’s a fabulous lady, and around here she gets lots of credit because we have the Dorothy Day Center But I don’t know that she gets credit in enough areas of the Catholic world or in America in general,” she said.

John J. Shea, S.J. director for Campus Ministry at Lincoln Center, said he found the pope to be very strong in what he wanted to say without being political. And while he was particularly impressed that Francis grouped Thomas Merton with Abraham Lincoln, Martin Luther King Jr., and Dorothy Day as Americans worthy of emulation, he said it was amazing just to see a pope in such a setting.

“We live in interesting times. A pope would never have been invited when I was a boy in high school, when John F. Kennedy was trying to get elected, because they thought the pope would try to run America,” he said.

“Today we see that 30 percent of Congress is Roman Catholic, including the speaker of the house, as are the vice president and more than half of the Supreme Court. It’s all amazing.”

The pope’s second day in New York began with an address to the United Nations, followed by a solemn visit the 9/11 Memorial and Museum in downtown Manhattan. Later that afternoon, the pontiff spoke to elementary school students at Our Lady Queen of Angels School in Harlem before greeting the multitude in Central Park.

At Central Park, where 80,000 New Yorkers won tickets in a lottery to the papal procession, some members of the Fordham community waited in line for nearly three hours to get into the park, as several lines snaked between 60th and 69th streets. 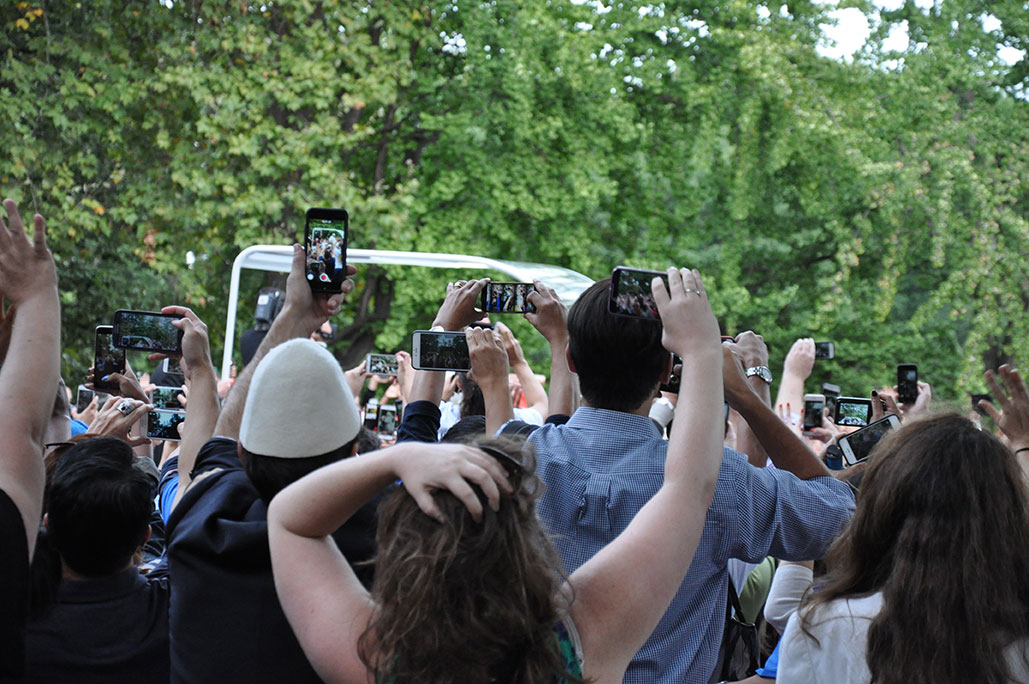 Many watched through cell phones as Pope Francis processed through Central Park on Sept. 25 before some 80,000 people.
Photo by Janet Sassi

Once in the park, Maddy Cunningham, DSW, professor of social work at the Graduate School of Social Service, made a decision to watch the procession rather than try to photograph the pope with her phone as he passed by in his Popemobile.

“I just wanted to see him with my own eyes, to experience the moment,” said Cunningham, who still remembers seeing Pope Paul VI in a procession on Queens Boulevard as a child in 1965. “I am glad I didn’t even try to film [because]he was turned to our side, and he was waving. I now have that image in my mind’s eye.”

Noreen Rafferty, an assistant director in the office of marketing and communications, videotaped the moment when “all the hands went up.”

“It was unbelievable,” she said. “There were so many nationalities—Italian, Irish, Filipino, Puerto Rican. He’s got to come again.”

Despite a three-hour wait and a line that stretched 20 city blocks, the atmosphere outside the arena was one of excitement and conviviality. Strangers befriended one another as they inched closer to the entrance. A group of nuns sang hymns to pass the time. One man broke from the line and ducked into a Duane Reade, returning with a case of water for the wearying pilgrims. 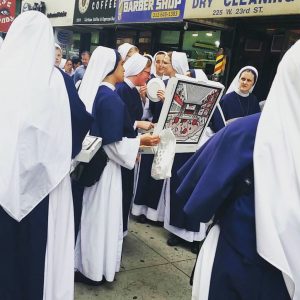 A group of Sisters of Life ordered dinner after waiting in line for hours to enter Madison Square Garden.
Photo by Joanna Mercuri

“I was thirsty, and I figured everyone else was, too,” he said as he distributed water bottles down the line.

At 6 p.m. sharp, musicians from St. Patrick’s Cathedral Choir and the New York Archdiocesan Festival Chorale began the processional hymn, and Pope Francis processed into the arena accompanied by bishops, priests, deacons, and seminarians from throughout New York State.

The 90-minute Mass was as international as the crowd itself, with the liturgy alternating between Spanish and English and prayers being offered in Gaelic, Mandarin, French, and Italian. In his homily, Pope Francis spoke in Spanish about the role of faith in cities. Big cities encompass the diversity of life, with their many cultures, languages, cuisines, traditions, and histories. Negotiating this diversity is not always easy, though, the pontiff said. Tragically, our most vibrant cities tend to hide “second-class citizens.”

“Beneath the roar of traffic, beneath the ‘rapid pace of change,’ so many faces pass by unnoticed because they have no ‘right’ to be there, no right to be part of the city,” Pope Francis said from an ambo built especially for the Mass by young men from Lincoln Hall Boys’ Haven.

“They are the foreigners, the children who go without schooling, those deprived of medical insurance, the homeless, the forgotten elderly. These people stand at the edges of our great avenues, in our streets, in deafening anonymity. They become part of an urban landscape which is more and more taken for granted, in our eyes, and especially in our hearts.”

The remedy to our “isolation and lack of concern for the lives of others” is faith, the pope said. We must heed the words of the prophet Isaiah by “learning to see” God within the city, and then go out to meet others “where they really are, not where we think they should be.”

“The people who walk, breath, and live in the midst of smog, have seen a great light, have experienced a breath of fresh air,” Pope Francis said. This light imbues us with a “liberating” hope—“A hope which is unafraid of involvement… which makes us see, even in the midst of smog, the presence of God as he continues to walk the streets of our city.” 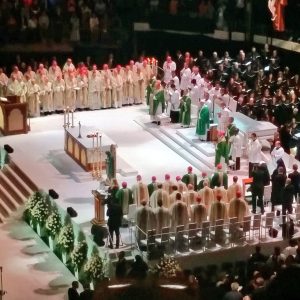 As the Mass drew to a close, Archbishop of New York Cardinal Timothy M. Dolan offered words of welcome and gratitude to the Holy Father on behalf of New Yorkers.

“Every day and at every Mass, we pray for Francis our pope—and now you here you are!” Cardinal Dolan said, prompting an eruption of cheering and applause throughout the arena—the single display of ebullience amid an otherwise reverent liturgy.

“It is so dazzlingly evident this evening that the Church is our family. Thank you, Holy Father, for visiting us, your family.”

The pope offered a final blessing and before departing, delivered his familiar farewell.

“And please, I ask you—don’t forget to pray for me,” he said.

On Sept. 26, students and other members of the Fordham community participated in a day of service with Habitat for Humanity-Westchester in honor of the pope’s visit, said Carol Gibney, assistant director of campus ministry. More students showed up than had signed up, she said.

The students worked on refurbishing the Pope Francis house in Yonkers as well as on some other projects in the surrounding area—cleaning an abandoned lot, planting flowers, and laying a brick walkway. 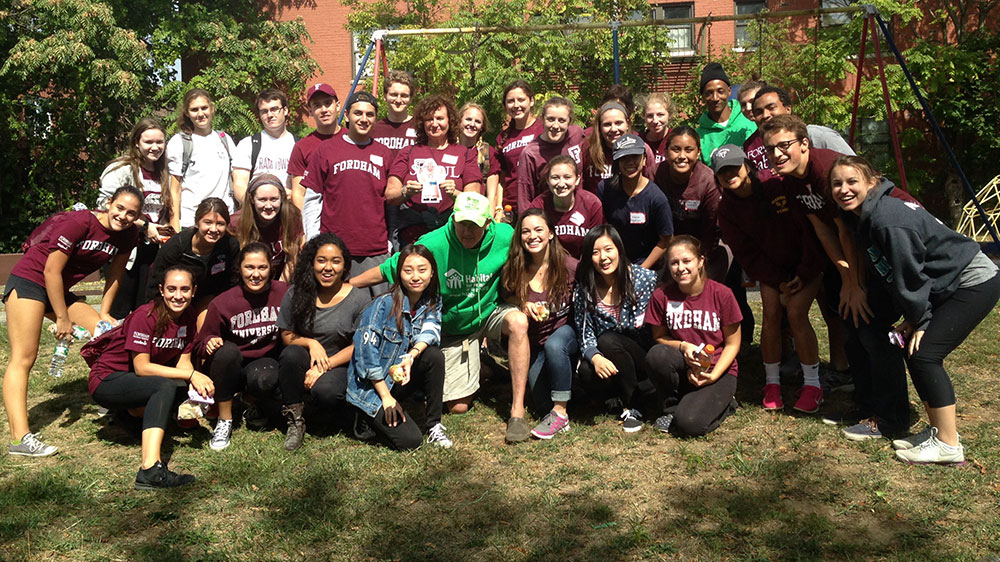 Fordham students volunteered with Habitat for Humanity on Sept. 26 to refurbish the Pope Francis House in Yonkers. They went on to clean up and plant mums in an abandoned lot in a neglected neighborhood nearby.
Photo courtesy of Carol Gibney

Once the South Yonkers house is completed in December, it will become the home of U.S. Army Sgt. Michael Velazquez, 24, and his family of six.

“It was a great day for our students as the idea of being men and women for others, particularly by helping to build a house for an Iraqi veteran, a house that is named after the first Jesuit Pope!”

(Patrick Verel and Janet Sassi contributed to this report. Various photographs were submitted by members of the Fordham community.)