In 1245, at the First Council of Lyon, when Pope Innocent IV decided to distinguish the cardinals in procession from those of lower rank, the wide-brimmed galero—or red cardinal’s hat—became a symbol of elevation to the College of Cardinals. Hence the popular term to “receive the red hat” is used to indicate that someone is being elevated to the rank of cardinal. 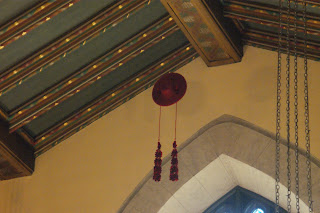 At consistories it was the custom to hang the galero over the seat of the voting cardinal and at his death it was hung over his tomb. Legend even has it that when the hat finally disintegrates and falls, the cardinal is released from purgatory and ascends to heaven. It became the custom that those cardinals who were archbishops and buried in their home cathedral had their galero hung from the ceiling over their tombs. Hence at St. Patrick’s Cathedral in Manhattan, we still see those of four previous cardinal archbishops hanging from the ceiling in the sanctuary.

Though Vatican II suppressed the wearing of the galero so that “the people could better identify with their pastoral leaders,” cardinals still display it on their coat of arms and some still have it hung in their home church after their death. Hence at Fordham University the custom continues today with the galero of Avery Cardinal Dulles, S.J., hanging from the ceiling in front of the stained glass window of the North American martyrs. Hopefully, however, Cardinal Dulles won’t have to wait for his hat to disintegrate or fall from the ceiling to enter into his heavenly reward.