skip to main content
Return to Fordham University
You are at:Home»Inside Fordham»The First Six Months of the Everyman Pope 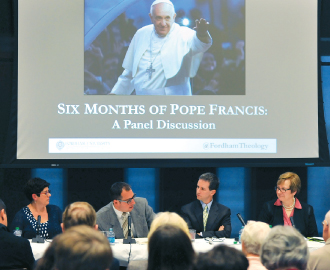 Panelists at Fordham said Pope Francis has used his first six months in the papacy to “open doors” to new kinds of theological, social, and ethical thinking in the church.
Photo by Dana Maxson

In February, Pope Benedict XVI shocked the world by announcing his decision to resign from the papacy— becoming the first pope to do so in nearly six centuries.

A month later, Argentinian Cardinal Jorge Mario Bergoglio was elected as Benedict’s successor, launching a papacy that in just six months has already been the talk of religious and secular communities around the world.

On Sept. 9, a panel of Fordham theologians gathered on the Lincoln Center campus to discuss how the newly elected Pope Francis has handled the first six months of his papacy. Moderated by Terrence Tilley, Ph.D., the Avery Cardinal Dulles, S.J., Professor of Catholic Theology, the panel featured:

• Christine Firer Hinze, Ph.D., professor of theology and director of the Francis and Ann Curran Center for American Catholic Studies;

• Michael Lee, Ph.D., associate professor of theology and president of the Academy of Catholic Hispanic Theologians of the United States; and

As the first South American and the first Jesuit to ascend to the papacy, Pope Francis represented a novelty for the church from the start.

The six months since his election have been no less unconventional.

On the flight returning from World Youth Day in July, he told reporters that although Catholic teaching is clear on the issue of homosexuality, “Who am I to judge a gay person of goodwill who seeks the Lord?” Recently, he personally phoned an Italian woman who wrote that she was concerned her unborn child would not be baptized because she was unmarried. He told her that if she received any pushback, he would baptize the child himself.

“This pope has an improvisational and simple style—something that is keeping the Vatican on its toes,” Peppard said. “He has a preference for simple vestments, simple shoes, for walking or riding the bus, and paying his own hotel bill after the conclave.

“And it’s still quite amazing that the pope does not live in the papal apartment. It’s as if we had a president who got elected and said there aren’t going to be any more inaugural balls.”
This new style has appealed to Catholics and non-Catholics alike, who, Hinze said, feel more welcomed by a pope who not only acknowledges but also understands their everyday struggles.

“This pope is a pastoral genius who speaks of a God who is close, who accompanies people on their daily struggles, who assures people that they are not alone,” she said. “It’s a fleshy, shoulder-rubbing, embodied way of enacting discipleship.”

Where Pope Francis’ on-the-ground papacy might appear radical, Lee said, is in his expectation that other Catholic leaders follow suit. At a meeting in June with leaders of the Conference of Latin American and Caribbean Confederation of Religious, the pope told participants to not be afraid of running risks and trying new approaches.

He brought the same message to World Youth Day this July in Rio de Janeiro, telling the 3 million gathered, “Become protagonists of change, work for a better world.”

“He has said, ‘I prefer a church that makes mistakes because it did something to one that sickens because it remains shut in,’” Lee cited. “It’s a remarkable set of comments.”

Though the pope’s election had galvanized the media from the start, sparking questions such as whether the departing and arriving popes would both live in Vatican City, interest within the media has not waned. Outlets ranging from the Wall Street Journal to BBC International have continued to call on Fordham theologians to interpret what this Everyman pope will mean for the Catholic Church.

“He’s a great story,” Zoll said. “He’s constantly doing interesting things. You can see that there’s a popular interest in the pope that goes so far beyond what typically interests people about religion.”

Tilley told the audience to pay attention as the pope appoints cardinals and bishops in the coming months and years, because his choices will set the tone for future church leadership.
In addition, papal encyclicals will contain hints about the future of the papacy, because popes often use these documents to qualify church teachings.

“If you want to know what he’s thinking, look at what’s being omitted and what’s being added in these texts,” Tilley said.

The event was hosted by the Department of Theology, in association with the Francis and Ann Curran Center for American Catholic Studies and the Center on Religion and Culture.