skip to main content
Return to Fordham University
You are at:Home»Living the Mission»Students GO! to the Bronx and Beyond Under a New Learning Model
Students in Ponce, Puerto Rico, during a GO! trip this January. Photos courtesy of Emely Paulino Cuevas, Amelia Medved, Lauren Pecora, and Benedict Reilly
Under a new model with the Center for Community Engaged Learning, Fordham’s longtime Global Outreach program is putting a greater focus on community engagement, rather than direct service. The pandemic threw a wrench in their plans, but it also gave them the space and time to explore this concept close to campus—and in locations within the U.S., as COVID restrictions were lifted.

“The formation process is now intentionally crafted with the location and partners in mind, and the focus on historical context and social justice as they relate to each project is stronger,” said Vanessa Rotondo, assistant director of immersions and senior adviser on Ignatian leadership at CCEL.

Over the past three decades, the program—more popularly known as GO!—has sent thousands of students to 36 different countries. These trips have always served as opportunities for students to meet people from different backgrounds and reimagine their perspective on the world. But when the program became part of CCEL four years ago, the way that students prepared for their trips changed.

In a 10-week “formation” process before their trip, they research and discuss the cultural, socioeconomic, and historic factors surrounding their trip. Instead of meeting community partners during the first few days of the trip, they also meet in advance on Zoom. After the trip is over, the students develop “sustainable outcomes,” or ways that they continue to apply the lessons from their trip to the classroom and beyond.

But throughout the years, the main goal of GO! has stayed the same.

“Fordham’s mission states that we seek to create global leaders. Global Outreach is the lived incarnation of that mission,” Rotondo said. “Having done a number of these projects myself—both as a student and now as an administrator—I think they are some of the most transformative experiences that the University offers.”

During the first year of the pandemic, GO! canceled several planned trips and pivoted to a virtual experience with several countries, including the Dominican Republic. The program also developed a civic education and digital activism project called GO! Vote where students raised political awareness across campus. In 2021, students resumed in-person experiences, but stayed close to home.

One of the biggest GO! projects of 2021 was a two-semester experience where students partnered with local nonprofit The Bronx is Blooming to learn about environmental justice in the Bronx. During the formation process, the team met with their community partners and discussed how inadequate government funding has led to public parks becoming breeding grounds for invasive plant species, in comparison to privately funded parks. Then they traveled to actual parks across the Bronx, where they removed several invasive species and partially restored the natural environment. 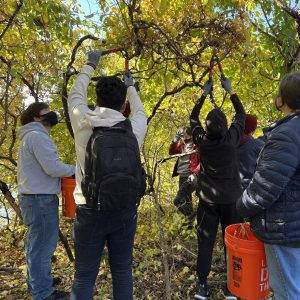 One popular local invasive species is Phragmites australis, a reed with a thick plume of seeds that had grown so thick in a Crotona Park pond that it choked out the native wildlife and their habitats, said Amelia Medved, FCRH ’23. Her team wore chest waders and entered the pond, where they hacked away at the plants and cleared them out. A few weeks later, they returned to tear out the regrown sprouts and replace them with native plants, including irises and blueberry bushes, that support local wildlife.

Besides working in nature, the students became acquainted with the community. They created homemade seed balls—seeds wrapped in soil and clay that can be planted anywhere—and set them up on a table along the Mosholu Parkway, where residents could take them home and talk to students about their own relationship with the public parks, said Medved. 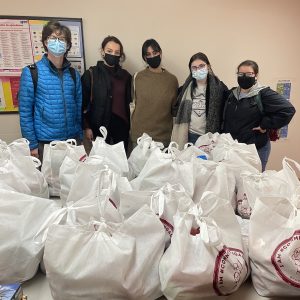 Students donate items to the Violence Intervention Program after handing out groceries at the St. Jerome H.A.N.D.S. Community Center in the Bronx.

“We developed a real attachment to the parks and this mindset that we can use later in life … how caring for the local ecosystem in our neighborhood is something that we can take personal care and pride in,” said Medved, an environmental studies and visual arts double major who plans on becoming a landscape architect. “It’s not a one-time volunteer day—it’s an ongoing effort.”

Another local GO! project was the Bronx Immigration Project. Students supported the work of three organizations, including the Violence Intervention Program, to host food, toy, and clothing drives for women and children from underserved backgrounds, especially those that have experienced abuse.

“The center helped me realize that there is a way for academics to be engaged in the world,” said Benedict Reilly, FCRH ’23, a theology and religious studies and humanitarian studies double major who participated in the project last fall, “and I want to continue doing that.”

‘A Heartbreaking Reality Check’ at the U.S.-Mexico Border

Other students traveled to the edge of the U.S. Earlier this month, a group of students traveled to Puerto Rico for a nine-day trip. They worked closely with APRODEC, a nonprofit that ​​serves the northeastern region, to renovate their Eastern Ecotourism Center—a place where the community will work together to promote their economy and people through sustainable tourism practices.

Emely Paulino Cuevas, FCRH ’22, said she observed a strong sense of community abroad that reminded her of her native Bronx.

“We don’t have the best reputation. A lot of people have given up on us. But what I’ve seen throughout the years and learned through history is that many people from the Bronx have supported one another in order to rebuild our community,” said Cuevas, a psychology student on the five-year teacher education track who plans on becoming a kindergarten teacher. “And I see that in Puerto Rico, too.”

More than 2,000 miles away, another group of students visited the border between the U.S. and Mexico.

“Our goal was to better understand the realities of life on the border. These things can be hard to understand when you’re not physically there,” said Lauren Pecora, FCRH ’22, who served as the trip’s student leader.

In collaboration with the Kino Border Initiative, Pecora organized and led weekly meetings throughout the fall semester, where students learned about the immigration process and discussed what it meant to enter new communities. The main highlight of the actual “immersion,” or trip, said Pecora, was listening to migrants tell their own stories. She recalled a 20-year-old man named Aldo who fled from the drug cartel in his native Honduras, where they had been trying to recruit him. 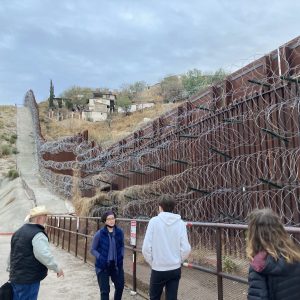 Students and their chaperone, professor Carey Kasten at the U.S.-Mexico border.

“He had to deal with corrupt authorities and violent experiences. Hearing all of this, and then playing soccer with him and the kids at the shelter and then realizing that he’s our age—it’s a heartbreaking reality check that he could be us,” said Pecora.

Over the next few weeks, Pecora said her team will come up with ways to stay connected to the national issue. Among them are a letter-writing event and involvement in the Hostile Terrain 94 art exhibit that moved from the Lincoln Center campus to Rose Hill this semester. What has stayed with her was physically witnessing the complexity of real-life issues, she said.

“I thought each experience would become a puzzle piece that created this picture of migration that I was missing, that these experiences would simplify the picture for me. But it really didn’t. It complicated it, in a very real way,” said Pecora, an international studies and theology double major who is considering working in community engagement for a nonprofit after she graduates from Fordham this spring. “And I think that speaks to Global Outreach’s mission: for students to be challenged by these partnerships with organizations around the world.”