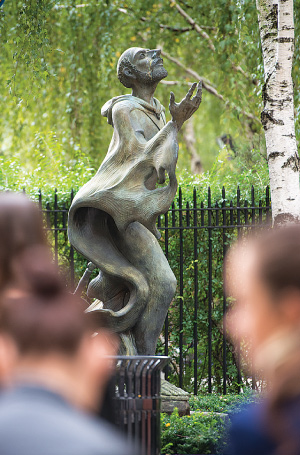 From a stark, secluded cave just outside Manresa, Spain, a young Íñigo de Loyola came upon the surefire path to God:

30 days of systematic prayer and meditation designed to reveal God’s presence in all things.

But in the interest of leading even the busiest believers to God, the future founder of the Jesuits penned another version of his Spiritual Exercises, so that men and women of all ages could have the opportunity to develop their spiritual lives.

This month, Fordham’s Campus Ministry will begin accepting applications to its Spiritual Exercises in Everyday Living (SEEL) retreat, based on St. Ignatius’ adapted version of the Spiritual Exercises. Offered annually, SEEL allows faculty and staff to undergo a 30-week experience of spiritual direction and prayerful study tailored to fit the busy lives of Fordham employees.

“Many people come with a life question, whether about work, family, or what to do with their time and energy, and others just want a more tangible relationship with God.”

The SEEL retreat incorporates the main themes of the Spiritual Exercises into the workweek by extending them over the academic year. Those interested can attend an information session later this month and then fill out a brief application. Once accepted, each participant will be paired with a spiritual director, with whom he or she will meet weekly. The group as a whole also meets monthly for lunch and a discussion on some aspect of the exercises. Outside of these meetings, participants devote 30 minutes to an hour each day to reflect on a Scripture passage or on commentary from St. Ignatius.

“The world we live in is always moving forward, so it’s important to pause and reflect on where we’ve come from,” Gibney said. “That’s one of the gifts of Jesuit education and the Spiritual Exercises—the praxis of reflection.”

Over the centuries, the Spiritual Exercises have come to be regarded as a way to help individuals contemplate major life decisions. However, the basic intent of the exercises is simply to grow closer with God, said Philip Florio, S.J., assistant vice president for Campus Ministry.

“The exercises are a manual of St. Ignatius’ own prayer experience at Manresa,” Father Florio said. “They are a systematic approach to prayer using Scripture, meditation, and contemplation about the life of Christ… the goal of which is greater communion with God and the world around you.”

Of course, this deeper relationship with God can indeed help those facing a life decision—in Ignatian terms, a process known as discernment—said Father Florio, because reflecting on and becoming more attuned to the essence of God will naturally help one to reach a thoughtful decision.

Aside from their usefulness, the importance of the Spiritual Exercises to the Jesuit tradition cannot be understated, Father Florio added.

Marc Canton, director of University transportation, cited that aspect of the Spiritual Exercises as a reason why the SEEL experience is especially beneficial to Fordham employees.

“You not only benefit from it personally, but it also helps to align you with the Jesuit way, which makes everything we’re asked to do in our jobs make more sense,” he said.

For Canton, the decision to join SEEL in 2009 stemmed from both personal and professional reasons. He was juggling responsibilities as a newly appointed administrator and simultaneously dealing with his father’s illness.

“I wanted to make sense of the things going on in a way that was positive and could make an impact on the world,” Canton said. “I was also having trouble discerning what God wanted me to do with my life, which is a big part of what the Spiritual Exercises are all about.”

He admitted that it was tempting at first to let his various work commitments take priority over the daily reflections. But eventually, he came to realize that the times when his motivation was lowest were the times that he most benefited from meeting with his spiritual director.

And in the end, although he did not get the answers he might have wanted, the experience helped him surmount his difficulties.

“I realized that it’s okay to not know the answers, and to trust that God will take care of me,” Canton said. “I learned to live in the right-here and right-now, because that is all you have.”

In May, Patrick Holt, assistant dean of the Graduate School of Religion and Religious Education, completed the most recent installment of the SEEL retreat. Holt was no stranger to Ignatian spirituality, having graduated from St. Joseph’s University in Philadelphia and completed a 10-day version of the Spiritual Exercises some 15 years ago.

“For me, it was a matter of reconnecting with my first experience. I had had a busy 15 years of working and having four children, so this was an opportunity to go back and renew,” Holt said.

A prime difference between his first experience of the exercises and the SEEL retreat, Holt said, was the monthly group meetings.

“It was a powerful part of the experience to meet with fellow employees—people living similar lives, working at the University, and integrating the ideals together,” he said.

Information sessions about the upcoming cohort of SEEL will be offered: