skip to main content
Return to Fordham University
You are at:Home»Living the Mission»Society of Jesus Selects New Leader 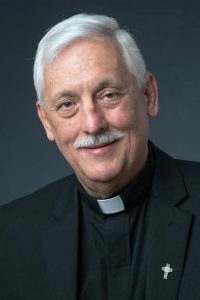 When members of the Society of Jesus gathered in Rome to chose a new leader last month at its 36th General Congregation, it did not take long to arrive at a consensus on October 14: Father Arturo Sosa Abascal, S.J., of the Venezuelan Province.

With his choice, the order, whose members have led Fordham since 1846, followed in the steps of the Catholic Church by selecting their first leader from Latin America.

Michael C. McCarthy, S.J., Vice President for Mission Integration and Planning, said this was unsurprising, given the fact that the region is one of the most populous areas of the world for Catholicism.

Father Arturo, a native of Caracas, Venezuela, was previously a delegate of the General for the Interprovincial Houses and Works of the Society of Jesus in Rome. A doctor in political sciences from the Universidad Central de Venezuela, he has a license in philosophy from the Andrés Bello Catholic University, peaks Spanish, Italian, and English and understands French.

Father McCarthy said the new Father General, who succeeds Adolfo Nicolas, S.J., has indicated that he would really like to collaborate with others on a global scale, but otherwise he has not indicated additional priorities. This is prudent, Father McCarthy said, and he said he hopes the new general will approach the position with care, patience, and understanding.

If asked for his advice, Father McCarthy said he would ask Father Arturo to help Jesuits in the United States set apostolic priorities. “In light of increasing demands for fewer Jesuits, we don’t have any clear sense of priority as to what we should be most invested and committed to in the longer term,” he said.

“Generals have been very good at being inspirational, and giving a philosophical, moral vision. I think we may also need more organizational vision.”