skip to main content
Return to Fordham University
You are at:Home»Inside Fordham»Sex and the Soul and the College Student

A few years ago, while teaching at St. Michael’s College, religion and sexuality scholar Donna Freitas, Ph.D., asked her students what they did on spring break. She heard story after story about hooking up, until one student stood up and objected to the prevalence and superficiality of casual sex. Other students quickly empathized.

“I was watching their passion for critiquing hookup culture once they figured out they weren’t alone, about how before they pretended it was awesome, but how it’s actually kind of awful,” Freitas told to a gathering of Fordham alumni, students, and faculty in Tognino Hall on Sept. 8. “They felt like they had been abandoned by the Catholic tradition to wallow in college without anything useful or practical to [guide]them. They wanted guidance.” 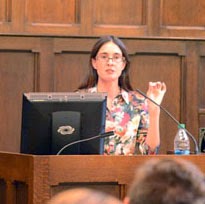 As part of Freitas’ study, more than 2,500 college students at seven campuses participated in an online survey, and she conducted one-on-one interviews with more than 100 students. She found that while students were interested in spirituality, and 80 percent of them identified as “spiritual, or religious to some degree, “even at a non-religious affiliated college, they often felt uncomfortable speaking about it outside the classroom setting.

It was much the same way with dating; students were interested in finding romance, but were hesitant to act upon their desires or even talk about it with friends and peers. “Students would say, ‘I want romance but I can’t admit that.’ Or ‘My parents did that, but that doesn’t really happen in my generation anymore.’ It was an anxiety around a wish for dating, but also this anxiety around [dating],” said Freitas, now a research associate in the Center for the Study of Religion and Society at the University of Notre Dame.

“It’s become a hookup culture,” Freitas said, noting that a hookup, according to students, meets three criteria: It involves some form of sexual intimacy, anything from kissing to sex; it’s a brief experience; and it’s free of emotional attachment. Freitas found that students often described hookups as “efficient,” feel they are too busy in college to develop and maintain relationships, and so they consider hookups “efficient.”

Nevertheless, 41 percent of those students who reported personal experiences with hooking up said they were “profoundly upset about this behavior,” and used words such as “awkward, dirty, miserable, empty, alone, disgusted, ashamed” to describe those occurrences. An additional 23 percent expressed ambivalence about hooking up, saying, “‘Hooking up is whatever; it makes me feel whatever,’” leading Freitas to term that group the “whateverists.” The remaining 36 percent labeled it as “fine.” 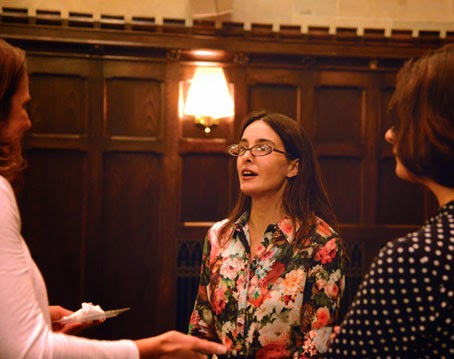 Students are not against hooking up, said Freitas, but “they’re unhappy with the culture” that breeds ambivalence and indifference “[Students] today are learning to steel themselves against connection, learning to shut down in order to be sexually intimate,” she said. “They are getting better at hookup culture, but I’m not sure we should be happy about that.”

Freitas raised concern about the relationship of hookup culture to sexual assault. If students are hooking up, “to have ‘efficient’ sexual intimacy, and to not get attached,” communication between the two individuals involved can be limited or even disregarded, “[making]the idea of consent very complicated,” she said.

“What does consent look like in a culture where when we are sexually intimate we are also discouraged from communicating?”

And yet, Freitas said, students who are propagating the hookup culture “want love and they want meaningful sex.” said Freitas.

Many hope to find that connection through spirituality, which they consider “much more forgiving, much more open, much more inclusive than religion.”

She heard over and over from students at Catholic colleges that “sex and religion don’t mix” and “religious teaching on sex are outdated.” In the face of peer pressure and mainstream American cultural attitudes about sex, she said students are struggling to reconcile their sexuality with their faith.

Freitas suggested that Catholic colleges, with their “extraordinarily rich history in spirituality and practices” be more creative and open in offering retreats, spiritual direction, social justice programming, and other resources to encourage students to examine the relationship between sexuality and spirituality—particularly within the campus community.