skip to main content
Return to Fordham University
You are at:Home»Inside Fordham»Lectures and Events»Scholarship Recipients Build Connections with Donors at Annual Reception

At the University’s annual Scholarship Donors and Recipients Reception, Fordham scholars expressed gratitude to the benefactors who have helped to make their dreams to attend Fordham a reality.

For Ian Cairns, a recipient of the Albert and Barbara Costello Scholarship, the April 23 event, which was held at the University Club in Manhattan, gave him a chance to thank the Costello family for their generosity.  Because of the scholarship, he was able to study finance at the Gabelli School of Business with “a peace of mind,” he said.

“A lot of my friends back home weren’t able to go away to college or they would have to come home during the week to work and help their families with rent and other things,” said Cairns, a first-generation college student. “This scholarship has allowed me to learn as much as I can, join a lot of clubs, and meet a lot of people.”

Cairns—who got to meet Barbara A. Costello at the reception—was one of more than 300 guests who attended. Several other scholarship recipients were able to meet and connect with the donors who have helped to fund their education.

Costello, who established the Costello Scholarship with her late husband, Albert Costello, FCRH ’57, said being able to alleviate the burdens of promising Fordham students like Cairns is helping to keep her husband’s legacy alive.

“When I see these kids, I see the dreams of my husband,” she said.

In his address to the donors and students, Joseph M. McShane, S.J., president of Fordham, called the donors “generous souls” who are contributing to success of talented students with limited financial resources. Benefactors have created more than 130 new scholarships for students as part of Faith & Hope | The Campaign for Financial Aid. The fundraising campaign has raised more than $130 million toward the University’s $175 million goal. 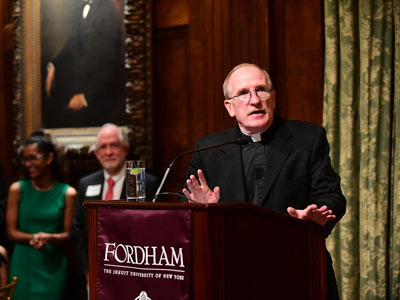 “Words could never tell you how deeply grateful I am for the fact that you make Fordham new every day,” he said.

“You make Fordham new because you are the patrons and saints for the young men and women in this room.”

Henry Miller, FCRH ’68, benefactor of the Henry S. Miller Endowed Fellowship for International Education and University trustee, spoke on behalf of the donors. In his speech, he discussed some of his own hardships as a college student and shared how getting the opportunity to study in France transformed his life. By funding the fellowship, he is able to provide promising Fordham students with similar study-abroad experiences in countries like Spain, Jordan, and African nations, he said.

“I share a history common to many of you here,” he told the students. “My parents were workers of modest means. They didn’t attend college. They couldn’t help direct my choice or even list my options.”

Arielle Murray, a first-generation college student and this year’s student speaker, shared how receiving the E. Gerald Corrigan Endowed Scholarship helped her to focus on her coursework and extracurricular activities.

“On top of majoring in music, and minoring in both Spanish and theology, I was also involved in the yoga and mindfulness club, Global Outreach Ecuador, and the Granada study abroad program,” the senior at Fordham College at Lincoln Center said. “Each would have their own hand in shaping who I would become.” 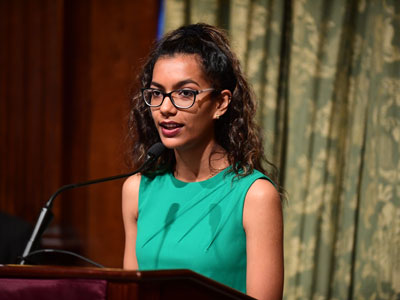 Arielle Murray, a first-generation college student and this year’s student speaker, spoke about how receiving the E. Gerald Corrigan Endowed Scholarship impacted her.

Murray said her family moved from Trinidad and Tobago to the U.S. in 1990 in pursuit of a better life. She shared that her older brother was supposed to be the first to attend college, but had the opportunity taken away from him when regulations tightened after 9/11.

“It was heartbreaking,” she said. “Instead of pursuing higher education as he wanted to, my brother had to immediately enter the workforce, which made me the first in our family to attend college. Understanding the extent of my family’s hardships piqued my awareness that the opportunity to pursue higher education was a great privilege.”

As Murray gave her speech, her parents Curtis and Nancy Murray looked on with pride.

“She has always been a meticulous student who was very serious about her work,” said Curtis Murray. “Sometimes, I would come home at night and find her studying even at 2 a.m.”

“Coming from my background, no one has ever been to college, so saving for college when I was growing up was not a part of the financial planning in my family,” said the Fairfield, Connecticut native, who explained that she had to take on different jobs to help cover the cost of her tuition.

“Once I got a scholarship, I was able to become an advising assistant for freshmen, volunteer at Murray-Weigel Hall, and join an accounting society [called Beta Alpha Psi],” she said.

Paul A. Soden, Esq., FCRH ’65, LAW ’68, and his wife Irene Soden, who established the Irene and Paul Soden Endowed Scholarship, said the annual event has allowed them to build personal connections with the scholarship recipients.

“I liked the fact that my donors are people that I could meet,” said Soden Scholar Lauren Scully, a student at Fordham Law. 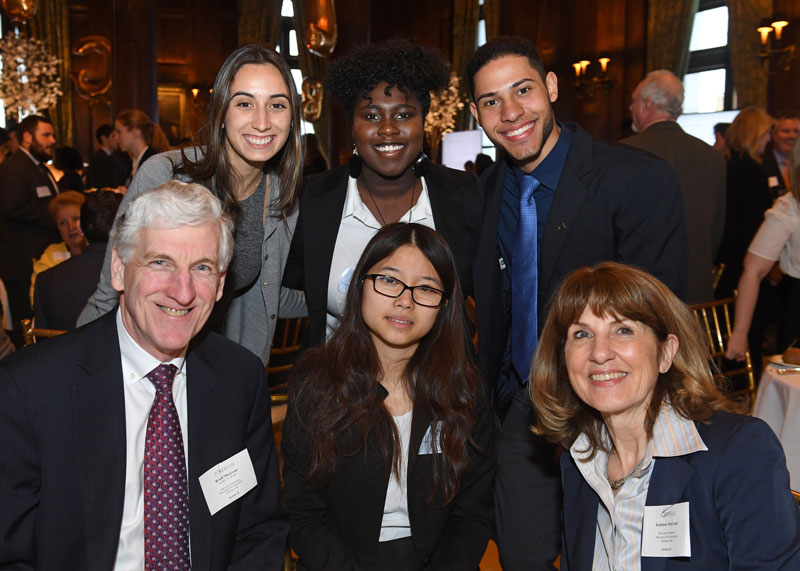 “It’s kind of a celebration of a long, hard adventure on everyone’s part—the donors, who for all these years, managed to accumulate enough money to be able to be generous, and the recipients who worked so hard to get the scholarships,” added Paul Soden.

Hearing about the personal challenges and strides of the students whom their scholarships support has inspired many donors to not only share their own stories, but also offer advice to their recipients. James P. Melican Jr., Esq., FCRH ’62, who has helped to support several Fordham Fund Scholars, said that these conversations are one of the most important parts of the evening.

“I sat with a couple of young people and I told them, ‘There is really nothing that you should not be willing to attempt,’” he said. He was pleased to see how the students have succeeded in their studies.

“People from so many other places in the world have the opportunity to come to Fordham and get the same kind of foundation that we got. I couldn’t be happier.”