skip to main content
Return to Fordham University
You are at:Home»Inside Fordham»Scholarship Donors Celebrate with Recipients
Father McShane, scholarship donors Jane and James Flaherty, Joseph O’Brien, recipient of the Flaherty Scholarship, and his mother Esther O’Brien (Photo by Chris Taggart)
When Fordham’s scholarship recipients meet their donors, the vibe is more a family reunion than a formal reception—and on April 25, many described it as such.

Flaherty was one of dozens of donors who met their scholarship students at a gala reception held at the University Club in Manhattan. She and her husband, James Flaherty, FCRH ’69, created a scholarship in her name, which is benefitting seven graduating seniors and one junior. 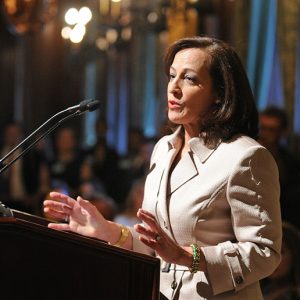 James Flaherty said that like many of the student recipients, he also received a scholarship that affected his life “in profound ways.” He spoke of family and friends from his neighborhood in Brooklyn who went on to solid careers as policemen and firemen. But he said his Fordham education helped him take a different path than most of his contemporaries. It helped foster a successful business career that later allowed him to travel the world and give back to his alma mater.

“They’re great kids and they deserve the same chance,” he said.

In the club’s soaring reception hall, Joseph O’Brien, FCRH ’16, one recipient of the Flahertys’ generosity, described a comfortable upbringing painfully disrupted by the sudden death of his father in 2013. A once certain college education seemed to slip from his grasp—until the Flaherty scholarship.

“I am eternally grateful to Mr. and Mrs. Flaherty,” he said. “I don’t see them as just my benefactors. To me they’re special partners in my journey.” 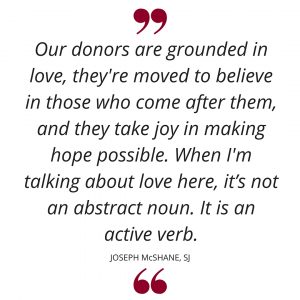 O’Brien was followed at the podium by Susan Conley Salice, FCRH ’82, who started a scholarship fund with her husband, Thomas Salice, GABELLI ’82, to pay it forward. Salice said that she and her husband were struggling first-generation college graduates.

“We were both from working-class families where college was truly out of reach for us,” she said.

She said that while both of them learned of the importance of hard work, responsibility, and compassion from their families, they did not necessarily learn from them how to get ahead in life.

“We knew that the only way to make a better lives for ourselves was to go off to college,” she said. “We also knew, quite frankly, that in order to go to college we were going to have to get money. We are so grateful that Fordham stepped up—in both our situations.” 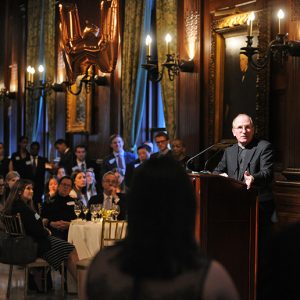 Joseph M. McShane, SJ, president of Fordham, called the crowd of donors and recipients “theologians” in that they were practitioners of three theological virtues: faith, hope, and love.

“Our donors are grounded in love, they’re moved to believe in those who come after them, and they take joy in making hope possible,” said Father McShane. “When I’m talking about love here, it’s not an abstract noun. It is an active verb.”

“I hope that I’m one of many people,” she said. “If a lot of people give, we can send students with values and skills out into the world.”