skip to main content
Return to Fordham University
You are at:Home»Living the Mission»Scholar Ponders Power of Orthodox Christian Converts

Orthodox Christianity, with its rich history and its deep ties to individual communities, is undergoing fundamental changes in the United States, thanks to pressures from converts and from society in general, a scholar told attendees at Fordham on Sept. 26.

“To be truly American in the most extreme way is to be a sort of proteus, capable of becoming just about anything,” said David Bentley Hart, Ph.D., research fellow at the Notre Dame Institute for Advanced Study.

“That may amount to a kind of cultural genius, but it does raise questions regarding what becomes [of]the many eastern Christians Orthodox traditions in this country, when immersed in an element of ceaseless dissolution and transformation.”

According to a 2015 Pew Research Center study, only 53% of Americans who were raised Orthodox still identified as Orthodox Christians. Therefore, the church can benefit from the dynamism, energy, and charisma of converts to the faith, said Hart, in his lecture, “Orthodoxy in America and America’s Orthodoxies.”

Just as importantly, converts can help the faith finally shed the burden of preserving ethnic pride and identity.

But they can also negatively change the faith through shallow understandings of its theology, he said.

“Many are accustomed to think of Christian faith as simply a uniform set of explicit beliefs,” he said.  Some of these attitudes are attributed to the innate character of the United States, which he described as “a nation more constructed than cultivated, built around a political and social project, always somewhat in flux, but also more or less relentlessly oriented toward the future” and “generated out of its own native ideals and values rather than out of any traditions that it might have inherited from the lands its peoples left behind.”

He saw a particular danger posed by converts from Evangelical backgrounds who are drawn to Orthodox Christianity because of their opposition to the Catholic Church.

“There are real differences that divide Christians, [so]it’s absolutely imperative that we not allow ourselves to deepen those divisions by exaggerating, misrepresenting, or to put it bluntly, celebrating them,” he said. 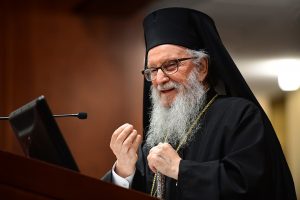 His Eminence Archbishop Demetrios, of the Greek Orthodox Church in America.

Hart said he was apprehensive but hopeful that a new form of “self-aware” orthodoxy is taking shape in the United States.

“[It] has at long last severed its mission to speak the gospel from its institutional and cultural subordination to nations, governments and discreet peoples,” he said.[It] will remind the convert that there is neither Jew nor Greek nor South Carolinian. All are one.”

In his benediction, His Eminence Archbishop Demetrios, primate of the Greek Orthodox Church in America, contrasted his own upbringing in the city of Thessaloniki, Greece, to his current residence on East 79th Street in Manhattan.

“How do you feel if you go from a history and a country with 95 percent orthodox people, and you come to this kind of situation where there are 198 different nations, countries, religions, languages, and everything is different?” he said. “You’re a special species. You create the contemporary orthodoxy rooted very strongly in the past, but looking to the future.”