skip to main content
Return to Fordham University
You are at:Home»Living the Mission»Scholar of Philosophy and Art Joins Orthodox Christian Studies Center
Neo-orthodox art by Romanian artist Mircea Roman, one of several artists whose work Asavei analyzes.
As part of its continuing expansion into new research areas, Fordham’s Orthodox Christian Studies Center has chosen Maria-Alina Asavei, Ph.D., to be its first faculty fellow.

Asavei, a lecturer at Charles University’s Institute of International Studies in Prague, joins the center thanks to a grant from the National Endowment for the Humanities. She is the author of Aesthetics, Disinterestedness, and Effectiveness in Political Art (Rowman & Littlefield, 2018), published just this month. 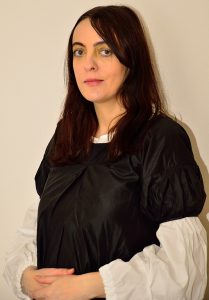 Speaking via Skype from Tbilisi, Georgia, where she conducted research, Asavei said she was excited that the fellowship would allow her to explore lesser known connections between art, politics, and spirituality. In particular, she plans to focus on political resistance through religious, neo-Orthodox art in post-communist Romania. She will publish her findings as a journal article.

Romania, which is where Asavei was born and raised, was home to an art scene that blossomed after the 1989 fall of Communist leader Nicolae Ceaușescu. Artists interested in the spiritual dimension of life, irrespective of the political status quo, generated works that were political in the sense that they addressed humanity at large, but didn’t try to polarize people into “us and them,” camps, Asavei said. Her plan is to bring to bear her expertise in philosophy and phenomenology to figures such as Romanian sculptor and painter Marian Zidaru, whose work has been traditionally pegged as religious, neo-orthodox art. 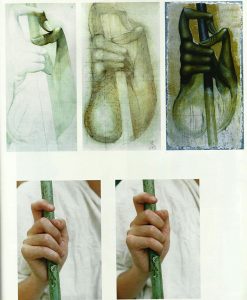 The Hand of Archangel Michael by Sorin Dumitrescu, circa 1993

“There is idea that the artistic neo-avant-garde doesn’t assimilate neo-orthodoxies, because according to these views, neo-orthodox artistic production is not political,” she said.

“I want to show that, actually, all these forms of artistic production instantiated a form of ‘prophetic activism.’ It was not like a straightforward resistance, like this oppositional type of resistance, but more like a spiritual resistance.” She credited artist and scholar Tom Block with informing her analysis.

Asavei compared this prophetic activism to the ways in which Jewish and Roma groups who were confined to ghettos practiced their religion in silence, in defiance of authorities who’d banned such practices. And just as important, she argues that artists are to this day continuing the practice, in deference to past tradition. Romanian painter Constantin Flondor, for instance, still incorporates a symbol of bread common to Orthodox Christianity in his work. 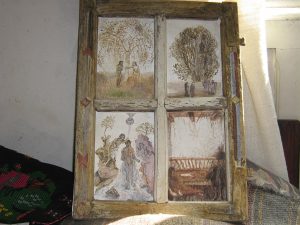 “This was not about resisting only Ceaușescu and his cultural policy and his imposed national Communist cultural production. Their so-called spiritual resistance is lasting. Even now, they are still producing the same kind of artworks, the same kind of performances, and engaging many communities of people,” she said.

She said she was drawn to Fordham’s center because of its embrace of scholars who are able to tap into multiple disciplines.

“For me, there is no need to bridge these two cultural fields [of religion and art]because they are already so much intermingled,” she said.

Asavei also has a personal connection to the work, as a member of the Orthodox Christian Church.

“The Orthodox tradition I came from is improving more and more with this advent of contemporary culture, and contemporary art especially, in terms of openness to other sets of concerns, like social justice and caring for the excluded and the disenfranchised, such as refugees,” she said.

“So it’s not only about my Orthodox community versus some other religious community, it’s about sharing a set of concerns from an Orthodox kind of framework.”

“We are thrilled to offer our first faculty research fellowship to Dr. Asavei, whose research offers a powerful testimony to the ways in which Orthodox Christian Studies illuminates so many dimensions of our contemporary world,” Demacopoulos said.