skip to main content
Return to Fordham University
You are at:Home»Living the Mission»Russo Lecture Features Theologian Esteemed by Pope Francis 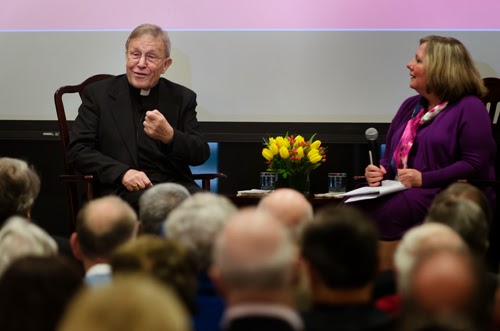 Fordham’s Center on Religion and Culture regularly presents programs that shed light on the complex relationship between religious faith and contemporary society. On May 5, it brought together two renowned theologians for an engaging talk on living a Gospel life.

The annual Russo Family Lecture—held at the Lincoln Center campus—featured Cardinal Walter Kasper, a theologian and former Vatican official, and Cathleen Kaveny, ethicist and legal scholar at Boston College. The topic was Cardinal Kasper’s new book, Mercy: The Essence of the Gospel and the Key to Christian Life(Paulist Press, 2014), which, on its cover, has a quote from Pope Francis: “This book has done me so much good.”

The director of the center, James McCartin, Ph.D., said he has long wanted to host the cardinal at one of its events because of the cardinal’s “very persuasive approach to thinking about God and the Church, and especially his insights about not devaluing the importance of local communities of faith as they relate to the Holy See in Rome.” McCartin was able to arrange the appearance because the cardinal was in town to publicize his book.

McCartin chose Kaveny to engage with the cardinal because he was well acquainted with her scholarly acumen, having known her since his graduate school days.

The discussion touched upon the work of Elizabeth Johnson, C.S.J., Distinguished Professor of Theology at Fordham, according to an article from Religion News Service.

“They were just very natural and engaging . . . it was exactly what we aim for at the Center on Religion and Culture,” McCartin said.

You can watch the discussion in its entirety here.