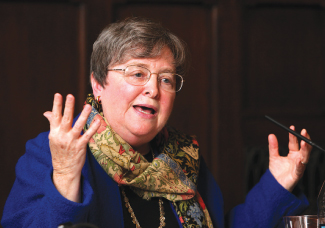 On the sixth day, God created Adam and Eve, and gave them dominion over every living thing upon the earth.

Then Adam, some say, took things a little too far.

At some point, mankind moved from “having dominion” to dominating totally, and the catastrophic consequences of this attitude are bearing out in the environment, said a scholar of systematic theology on Oct. 28.

Delivering the ninth annual Rita Cassella Jones lecture, “So Much is in Bud,” Elizabeth Johnson, C.S.J., Distinguished Professor of Theology and internationally known scholar and lecturer, laid out the contributions that Catholic women are making to the emerging field of ecological theology. The new field takes the view that God is immanent in nature and, therefore, that humankind should seek to right ecological and social injustices.

Many Catholic women scholars have attributed the apparent transformation from “dominion” to “domination” over the natural world to the philosophy of hierarchical dualism that Christian theology inherited from ancient Greece, said Sister Johnson. Such dualism splits the world into two realities: spirit and matter. And spirit (for example, the mind, reason, and the soul) is more valued than matter (the body, emotions, and passivity) because of spirit’s association with the divine.

“[This is] also a story of the rule of men over women,” Sister Johnson said. “Hellenistic philosophy identified men with eternal spirit, and relegated both woman and nature to the opposite pole of matter marked by messy bodily change, lack of intelligence, and natural subservience… The physically fertile powers of both women and earth served men’s needs for progeny and life-maintaining skills.”

This dualistic worldview pervades church history, given that “its doctrinal and moral teaching, laws, rituals, and governing offices are all crafted, decided upon, and led by men,” Sister Johnson said.

As a result, women theologians have called for an end to theologies of domination—particularly the brand of male domination that keeps men in power and women and nature in service.

“Until we untangle the threads that weave the subordination of women and domination of nature together… the pillar of gender dualism will continue to hold in place nature’s inferiority and man’s right to rule,” Sister Johnson said.

In place of dualism, Catholic women theologians are calling for an ethos of mutual interdependence and kinship that pivots on the “sacramental imagination.”

According to this view, the natural world “reflects the One who created it.” It is sacred, because God, its creator, is not outside of or above the natural world—God is immanent, dwelling within the world.

This philosophy requires a greater focus on the Holy Spirit—an image of God that Scripture often portrays in feminine terms, for example, as a hovering mother bird.

“If we had this theology of the Holy Spirit active, we’d see that, rather than being divorced from what is scared, nature is imbued with spiritual radiance…and the Spirit moves in these every bit as vigorously as in souls, minds, ideas,” Sister Johnson said. “Catholic women are growing this doctrine forward.”

Embracing a theology that views nature as sacred would benefit not only the environment, but also the world’s poorest populations, who often bear the burden of environmental crises, she said.

“Poor people suffer disproportionately from environmental damage inflicted in pursuit of corporate profit,” Sister Johnson said. “And the plight of the poor becomes intensified in poor women, whose own biological abilities to give birth and nurture children are compromised by depleted environments, and whose daily workload is increased exponentially by lack of clean water, food, and fuel.”

Co-sponsored by the Francis and Ann Curran Center for American Catholic Studies and the family of Rita Cassella Jones, the lecture series highlights women’s concerns in the U.S. Catholic community.