skip to main content
Return to Fordham University
You are at:Home»Athletics»Rams Football Player Gives Gift of Life for Christmas

Don’t blame Fordham University football student-athlete Roddy Roche if he starts playing the lottery. He has already beaten some long odds–as a bone marrow donor. Roche was selected from over nine million bone marrow registry members to donate his bone marrow to a 60-year-old woman who is suffering from cancer.

Roche started the process by registering at annual Fordham football “Be the Match” registry last April. He completed a quick registration form and then submitted a swab of cheek cells using a cotton swab to determine tissue type and his results were stored in a database, awaiting a match.

“Everyone on the team was registering and we were encouraging others to register too,” said Roche. “I had no idea that I would be a match and get a phone call about helping to save someone’s life.” 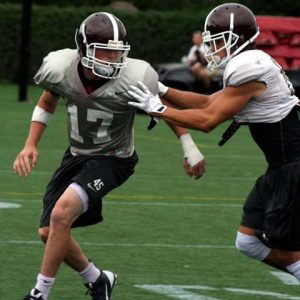 The call came in August, at the beginning of the football season. Roche was asked to submit to further testing to determine if he would be compatible with the person in need, with the odds still being about one in ten for Roche being a perfect match.

In September, Roche got the call that would change his life. He was told that he was a match for someone in need of bone marrow. Even though it was in the middle of another successful football season, Roche didn’t hesitate when asked to donate, even if it meant he would have to miss football activities for a period of time.

“When I got the call and heard the other person say ‘thank you for your donation, you are a match’ a lot went through my head,” said Roche. “But it wasn’t very difficult to agree to do it, knowing that I could help someone in need.”

The original plan was to have Roche donate in October but he received a phone call that the recipient had taken ill and they would have to delay the procedure. A few weeks before thanksgiving, Roche was told that the donation was a go and on November 30, he started a four-day stretch in which he received shots in his arm and abdomen to prepare his marrow for donation. Then on December 3, he went to a blood center in Manhattan for the five-hour process.

“It was relatively painless,” said Roche. “They hook you up to a machine that removes your blood and separates out the marrow before returning the rest of the blood back into your other arm. The toughest part of the whole process was having to sit completely still the entire time.”

Roche isn’t the only one in his family who is a member of the Be the Match registry as his father is also on the list.

“My father’s been on the donor list for over 15 years and has never been called,” said Roche. “He’s jealous that I was only on the list for two months when they found a match. But in the end I think it’s cool that someone has the chance to live longer for what I did.”

Despite the odds, one thing is certain. Roche will be hard pressed to get anyone a better gift this Christmas than the one he gave to an anonymous woman.