skip to main content
Return to Fordham University
You are at:Home»Living the Mission»Professor Elevated to Post Overseeing ‘Conversations’ About Jesuit Higher Education

James P. McCartin, Ph.D., associate professor of theology and former director of Fordham’s Center on Religion and Culture, has been appointed chair of the Seminar in Jesuit Higher Education, which is best known for publishing the magazine Conversations. His appointment began in January. 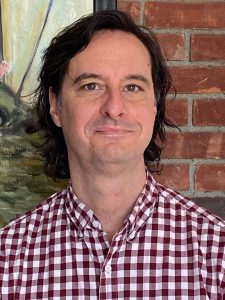 The magazine, which is published biannually, is run by a board comprised of both lay people and clergy, and is distributed to all 27 Jesuit colleges and universities in the United States.

McCartin, a member of the seminar’s board from 2013-2016, is the first lay person to assume leadership of the seminar, succeeding the late Patrick J. Howell, S.J. He said the post, which is akin to a publisher, allows him to combine two of his greatest passions: Fordham University and Jesuit education.

“Jesuit higher education is one of the most important things on the landscape of contemporary American higher education, in terms of the moral development and the ethical imperatives that it seeks to instill in students, and the possibilities for developing leaders for the world we live in,” he said.

It’s a role that McCartin has actually been pursuing with the University since he stepped down from the Center on Religion Culture in 2017. For the last three years, he’s been working with Fordham faculty to enhance their understanding of, and engagement with, Fordham’s mission and help them see how that mission can enhance their lives, their work, and the whole Fordham community. Last year, he was part of a contingent of faculty that traveled to the southern border to bear witness to the immigration crisis taking place there.

“In a sense, the seminar and leadership of it gives me the ability to bring some of my work locally with our faculty to a new, national level,” he said.

He’s especially excited to take on the role as the first lay leader of the group, and credited Joseph M. McShane, S.J., president of Fordham; Dennis Jacobs, Ph.D., provost and senior vice president for academic affairs; and Eva Badowska, Ph.D., dean of the Faculty of Arts and Sciences, with making it possible. In many ways, it’s a logical step in the Society of Jesus’ work to expand its influence outside of its current membership.

When it comes to the magazine, the next two issues will be devoted to the four priorities that the Society of Jesus’ Superior General Arturo Sosa, S.J., laid out last year: Showing the way to God through the Spiritual Exercises developed by Saint Ignatius Loyola, caring for our common home, journeying with the young, and walking with marginalized people. McCartin said he also wants to update the magazine’s messaging to reflect best practices of publishing. In addition to a traditional printed product, the magazine will also embrace online publishing and social media. Recent web features have focused on the ways university communities are coping with the novel coronavirus outbreak.

“Every issue, article, or post we create should really reflect a desire to ensure that we are up to date and sophisticated in how we are thinking about the present and future of Jesuit higher education,” he said.

“If this publication can help us as a community of 27 to think creatively about the next steps for us to think about what it means to be educators in the Jesuit tradition, I would like that for be the case.”