skip to main content
Return to Fordham University
You are at:Home»Inside Fordham»Political Theology: A Redundancy? 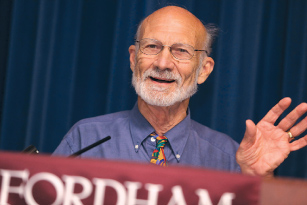 Contemporary theologians have lauded Stanley Hauerwas, Ph.D., who was named “America’s Best Theologian” by Time magazine in 2001, for having articulated “the most coherent and influential political theology in and for the North American context.”

“I assume [they]must know what [they]are talking about, but I confess, for me the idea that I am a political theologian will take some getting used to,” Hauerwas, the Gilbert T. Rowe Professor of Theological Ethics at Duke Divinity School, said at Fordham.

His keynote address, “How to (Not) Be a Political Theologian,” concluded the second day of the third annual Solon and Marianna Patterson Triennial Conference on Orthodox/Catholic Relations, which took place June 11 through June 13 at the Rose Hill campus. Sponsored by the Orthodox Christian Studies Center, the conference brought international scholars together to discuss the compatibility of Christianity and democracy.

The conference marked the 1,700th anniversary since the Roman Emperor Constantine issued the Edict of Milan, which freed Christians from persecution and inaugurated the complex relationship between church and state. With the advent of modern forms of democracy, the relationship between Christianity and democracy has been ambiguous. Some Christian theologians continue to question whether liberal democracy, with its emphasis on individualism, is compatible with the Christian conception of the human being.

Hauerwas said he has often been accused of being a “sectarian, fideistic tribalist” who works to discourage Christians from engaging in worldly politics. Yet he says nothing could be further from the truth.

“I have always assumed any theology reflects a politics, whether that politics is acknowledged or not,” he said. “[But] I resist using the phrase ‘political theology’ for many of the same reason I try to avoid the phrase ‘social ethics.’ Ask yourself: what kind of ethic would not be social?”

Generally, theologians have rarely contested that Christians should be politically responsible, especially for the sake of working for social justice. Moreover, some theologians have argued that the human tendency toward sin makes politics necessary in order to limit self-interest and promote the common good. Given these needs, democracy, with its emphasis on equality and justice, has typically been the politics of choice for Christianity.

Despite what critics have said about his so-called political theology, Hauerwas said he agrees that a democratic society is critical for bringing about a virtuous society. Nonetheless, he argues that there is a “deep tension” between this appeal to the common good and liberal political theory.

“I tried to show how liberalism, particularly in its economic modes, subverted the democratic commitment to sustain a common life necessary to make possible lives of virtue.”

This, he said, is because liberal democracies often fail to provide enough protection for the “economic and security interests of their least-advantaged citizens.”

Even so, he said, “Christians could not and should not withdraw from serving their neighbor through political engagement.”

The conference was co-sponsored by the Interdisciplinary Program of Hellenic Studies at the Richard Stockton School of New Jersey and the Cantonis Chair of Byzantine Studies at Hellenic College and Holy Cross.