skip to main content
Return to Fordham University
You are at:Home»Faculty Profiles»Pastoral Counseling and Neuroplasticity: Rewiring the Brain to Lower Stress and Anxiety

If Jesus were a neuroscientist, talk of “plasticity” might have made the final cut of his Sermon on the Mount.

It turns out that when he counseled his disciples, “Do not worry about tomorrow, for tomorrow will worry about itself,” Jesus was tapping into a concept that neuroscientists say could reduce stress for our hyperanxious society. 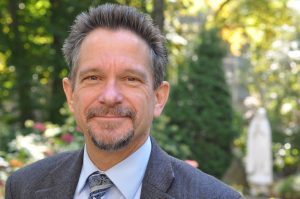 At Fordham, Kirk Bingaman, Ph.D., an associate professor in the Graduate School of Religion and Religious Education, is taking his lead from these neuroscientists and arguing that those who find solace in the sermon would also benefit from what science has to say. In his latest book, The Power of Neuroplasticity for Pastoral and Spiritual Care (Lexington Books, 2014), Bingaman suggests ways pastoral and spiritual caregivers can draw on contemporary neuroscience to help their clients and congregants relieve undue anxiety.

“We hear it in the Sermon on the Mount and we hear it in our churches today—don’t worry about tomorrow, stay centered in today. We grasp it intellectually, but how, practically, do we not worry?” said Bingaman, who is also a pastoral counselor.

Neuroplasticity and the Negativity Bias

In the book, Bingaman explores the impact that an adaptive mechanism known as the negativity bias has on our well-being. An evolutionary cousin of the “fight or flight” phenomenon, this bias describes the brain’s propensity to experience negative events more intensely in order to alert us to potential danger.

A built-in negativity bias was vital when humans lived as hunter-gatherers ever at the ready to flee from a hungry lion. In the modern world, however, this bias tends to cause excessive negativity and anxiety.

“[This] anxiety spills over into our relationships with others and with ourselves,” Bingaman said. “It causes us to assume the worst, to overreact to situations in ways such as, ‘Why did you look at me this way? Why did you use that tone?’”

Fortunately, he says, we are not condemned to primal negativity, thanks to the human brain’s capacity to change across the lifespan. With every new experience—creating a memory, learning new information, or adapting to a new situation—the brain undergoes structural changes, generating new neural pathways and reshaping existing ones. This ability, known as neuroplasticity, forms the crux of Bingaman’s book. 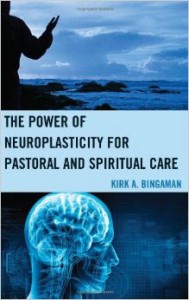 He argues that the most effective way to harness the power of neuroplasticity is through mindfulness meditation and contemplative spiritual practice. Through these therapeutic and spiritual techniques, clients learn to become aware of their thoughts and feelings. Rather than reacting to or trying to eliminate them, clients learn to simply observe them as they come and go, without getting “hooked.”

“Thoughts and feelings have a 90-second shelf-life biochemically. So when we experience an anxious thought or feeling, [the reaction]will dissipate from the blood in 90 seconds—unless we feed the thought or judge ourselves for feeling that way,” he said. “The key to mindfulness-based therapy is to let thoughts and feelings come and go without fighting them. This then reduces the limbic activity in our brains and calms the amygdala.”

These practices—which are so well-regarded that they are central to the “third wave” of classical cognitive behavioral therapy—can take a variety of forms and be applied in both religious and nonreligious settings. For example, one might spend 15 minutes each day sitting quietly and focusing on the ebb and flow of his or her breath. Alternatively, one might practice something like the Christian centering prayer, in which the practitioner meditates on a “sacred word” (such as “Jesus,” “God,” or “love”) while learning to modulate the many other chaotic thoughts that crowd the mind.

A New Approach to Pastoral Counseling

Bingaman says that these practices, informed by the science of neuroplasticity, will “necessitate a paradigm shift” in the way pastoral and spiritual caregivers approach their work with clients, especially clients whose anxiety may have been exacerbated by their own religious beliefs.

“When a theology views the spiritual quest as a matter of warfare—as a battle within the person, or as a matter of good versus evil and flesh versus spirit—that activates neural circuitry that causes stress,” he said. “If we overdo that construct, the person in our care might see himself as flawed and defective, and that could end up reinforcing the negativity bias.

“Whether it’s therapy or theology, we need to look at the frames of reference we are using to help the person in our care to calm their anxious brain. Some of our approaches are going to fire up the limbic region, and others will do the reverse,” he said. “So we have to make more use of contemplative practices in religious and spiritual circles… They’re not just for the mystics off in the desert. They’re for you and me and everyone else.”