skip to main content
Return to Fordham University
You are at:Home»Inside Fordham»Passing on the Catholic Intellectual Tradition 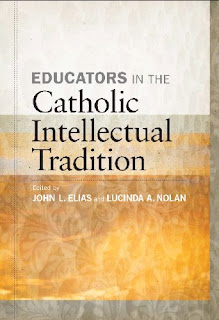 “There is no area of human endeavor and culture that does not find expression within the Catholic intellectual tradition,” according to Fordham Professor John L. Elias and Lucinda A. Nolan. Their new book, Educators in the Catholic Intellectual Tradition (Sacred Heart University Press, 2009), is a collection of studies of ten prominent educators in the United States that outlines the ways Catholic education has progressed over the centuries; how the faith has been handed on from generation to generation; and how Catholics have learned to live their faith in the world.

The book’s introduction begins a survey of Catholic education with Jesus, a rabbi who sent apostles and disciples on teaching missions, and proceeds through centuries of teaching and learning to the present day. The book identifies key contributors to the Catholic intellectual tradition in the United States, as well as the nature and parameters of their influence on Catholic education.

John L. Elias, Ed. D., professor of religious education and social ministry in theGraduate School of Religion and Religious Education (GRE) at Fordham, has published Philosophical Foundations of Adult Education; A History of Christian Education: Protestant, Catholic, and Orthodox Perspectives; and Paulo Freire: Pedagogue of Liberation. Lucinda A. Nolan, Ph.D., assistant professor in the School of Theology and Religious Studies at The Catholic University.

Today, in what has become a global church, new questions and previously undreamed-of situations face all who participate in the Christian teaching-learning process. This book offers historical perspective and encouragement to anyone involved in Catholic education.