skip to main content
Return to Fordham University
You are at:Home»Inside Fordham»Lectures and Events»Panelists Debate Religion and Race in America
Aimee Cox, Willie James Jennings, Jacqueline Lewis, Jennifer Jones Austin, and Darnell Moore explored the whitewashing of Christianity.(Photo by Leo Sorel)
In a nation as devout and as racially divided as the United States, one question to ask might be: What role does religion play in our race issues?

That question was taken up by five African-American scholars and theologians on Feb. 22 at an event titled, “Deliver Us from Hatred: Does Religion Have a Race Problem.”

The event was sponsored by the Center on Religion and Culture. Fordham’s Aimee Meredith Cox, Ph.D., an assistant professor of anthropology, moderated. 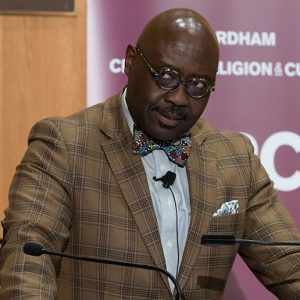 In his keynote address, Willie James Jennings, Ph.D., associate professor of systematic theology and Africana studies at Yale Divinity School, said that the evening’s conversation comes at a critical moment for the nation.

“We live in a racial world not of our own choosing or making,” he said. “[Our] legacy is the creation of a radicalized identity which fundamentally distorts the way we see each other.”

With regard to American religion, Jennings said the whitewashing of Christianity developed the moment that European settlers took land from the First Nations and claimed it as their own.

“You can’t understand religion in America without understanding the taking of land,” he said.

Today, all Americans, regardless of their faith, need to “double down to understand how Christianity works,” particularly in light of the last election in which theology has been “transplanted into political philosophy.”

While some Americans might find President Donald Trump’s pronouncements “goofy,” he said, others hear the “word of God.” To fully understand this, one must engage his supporters at their level of faith. Jennings said that for some, a vote for the president was an “act of love” based on strongly held religious beliefs, particularly conservative Christian beliefs.

He said that there is pressure in today’s political climate for all religions to “look like white Christianity,” including Islam. Many American Muslims face the pressure of being the outsiders, so they opt instead to “sit quietly for fear of seeming un-American.”

“I deeply worry about the future of Christianity,” he said. “We’re in a moment where people have rolled their faith into their national identity.”

Jacqueline Lewis, Ph.D., senior minister at Middle Collegiate Church in Manhattan, made a point of using Jesus’ Aramaic name, Yeshua, in speaking about his beginnings and his true Christian message.

She said that Yeshua was born of a homeless, brown-skinned, unwed, Palestinian Jew and was adopted by a poor carpenter.

“God chose a multiracial baby,” she said. “That outsider-turned-rabbi is then killed for being outside of the power; he was scary enough to them to be murdered.”

Jennifer Jones Austin, LAW ’93, CEO of the Federation of Protestant Welfare Agencies, noted that such histories and perspectives are lost on many Americans who have been failed by the public education system.

She said that small, mostly private liberal arts colleges might teach critical thinking skills, but the majority of Americans might not learn such skills until graduate school.

“In America, many may have degrees. But they’re not taught to think critically,” she said. “And that is what plays out in our religious settings as well. Christianity has been crippled by the lack of critical thinking.”

As such, educational institutions are also inherently a part of the race problem, said Darnell L. Moore, writer-in-residence at the Center on African-American Religion, Sexuality, and Social Justice at Columbia University.

“[In college and graduate school,] I had to struggle to find black and queer theologians,” he said.

Moore said that all institutions, including universities and religious establishments, must look to systemic change in order to commit to a more just, greater good.

“We have to distinguish between our commitment to the feel-good cosmetic conditions that are part of the problem and the structural conditions that are necessary,” he said. “Unless we’re ready to wrestle with the fundamental, thorny issue of structures, we are never going to create real transformation and real material change.”