skip to main content
Return to Fordham University
You are at:Home»Inside Fordham»Orthodoxy Lecture Chronicles the Philokalia 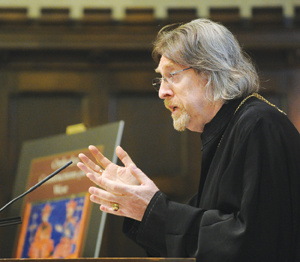 American writer J.D. Salinger, author of The Catcher in the Rye and student of the Hindu tradition Advaita Vedanta, would seem an unlikely proponent of Eastern Christian Orthodoxy.

But it was Salinger’s 1961 book Franny and Zooey that helped usher into American thought an ancient Orthodox tradition known as the Philokalia, said the Very Reverend John Anthony McGuckin, Ph.D.

Father McGuckin, the Ane Marie and Bent Emil Nelson Professor in Late Antique and Byzantine Christian History at Union Theological Seminary and professor of Byzantine Studies at Columbia University, was the keynote speaker at the ninth annual installment of the Orthodoxy in America Lecture Series, held Nov. 14.

In his lecture, Father McGuckin traced the roots of the Philokalia, a compilation of spiritual texts, and how this tradition arrived in America.
One of the most important books in the Orthodox tradition, the Philokalia contains the writings of spiritual masters who strived to illuminate the path to religious awakening.

“The collection of texts follows a broad but generic master-theme: the correlation of the search for inner stability with the quest for the transcendental vision of God…whereby the human soul, at its highest level of cognition, might awake in its upper levels of sensibility into the unmediated presence of God,” Father McGuckin said.

Father McGuckin highlighted three Orthodox saints—St. Paisy Velichkovsky, a Romanian Orthodox saint, and St. Nikodemos the Hagiorite and St. Makarios of Corinth—who made important contributions to the Philokalia and helped disseminate it throughout the Eastern world. 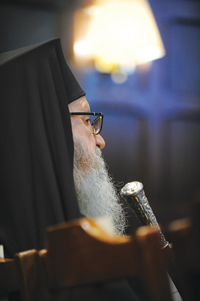 Archbishop Demetrios, primate of the Greek Orthodox Church in America, was one of several special guests in attendance.
Photo by Chris Taggart

Among the Philokalic spiritual practices that these writers and translators emphasized was the Jesus Prayer, a meditation that repeatedly recites the phrase “Lord Jesus Christ, Son of God, have mercy on me, a sinner,” until it becomes ingrained in the mind and heart of the person saying it.

Following the death of St. Paisy, who labored to bring the Philokalia to the Slavic countries, the text was brought further east to Russia and the Ukraine. Here, the Jesus Prayer made its way out of monastic communities and gained popularity among the laity.

In the mid-19th century, two Russian mystics published the Way of the Pilgrim, the story of a poor peasant who masters the Jesus Prayer as he journeys through Russia. The story’s translation into English helped give the Philokalia its final push from the monastery into the “global village,” Father McGuckin said.

“And nowhere [was]that global village more epitomized than New York…in the hip 1960s of the 20th century,” he said.

During this time, the American public was becoming increasingly interested in mystical traditions such as Zen Buddhism and Advaita Vedanta. It was at this time that Salinger penned Franny and Zooey.

The book chronicles the existential crisis of Franny Glass, a Manhattan college student in her 20s who plunges into despair over the selfishness and superficiality she perceives around her. In her anguish, she becomes preoccupied by the Way of the Pilgrim and recites the Jesus Prayer incessantly.

With the help of her elder brothers Zooey and Buddy, Franny looks deeper into the Jesus Prayer and learns that we must have mercy on ourselves and on others—just as the prayer implores God’s mercy. This mercy ultimately translates to love, the “true fabric of existence,” Father McGuckin said.

“Franny’s story revealed to a very large reading public the existence of the Way of the Pilgrim, which became for American Protestants and Catholics a major highway into Orthodox spiritual practice,” Father McGuckin said.

“We need to take to heart the American icon of Franny Glass, and be wary of using the endless cycles of the repetitive ‘Lord have mercy’ to make us even more neurotic than we presently are,” he said.

“It is wise to remember… that this process needs an experienced guide—even while admiring the courage of many great devotees of the prayer, who still insist that it ought to have wide and public dissemination.”

The annual Orthodoxy in America Lecture series, the largest annual lecture of its kind, is sponsored by the Orthodox Christian Studies Center.