skip to main content
Return to Fordham University
You are at:Home»Inside Fordham»Orthodox Christian Studies Feted and Supported at Fordham

The Orthodox Christian Studies Center of Fordham Universitycelebrated two successful events this month, with the help of faithful friends who came out to support the continued study of Orthodox theology and culture.

A June 10 benefit party at Greek restaurant Thalassa drew more than 150 people whose contributions helped the center meet the crucial first fundraising deadline for its recently awarded National Endowment for the Humanities (NEH) Challenge Grant. The NEH will award $500,000 to the center in four annual installments if Fordham raises $375,000 each year for a total of $1.5 million. 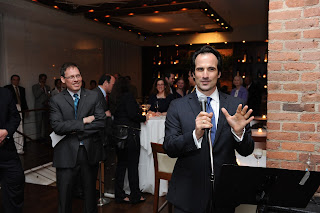 The $2 million endowment resulting from the prestigious grant will create two new programs for the center: the Distinguished Scholar-in-Residence program and the Dissertation Completion Fellowship program.

Aristotle Papanikolaou, Ph.D., FCRH ’88, co-founding director of the center, praised Fordham for “embracing the Orthodox community—not only the Greeks,” but all Orthodox Christians. The grant, he said, “will do great things for Orthodoxy and for the church.”

“All of you are a part of history,” he told guests at the Tribeca eatery, owned by brothers and Fordham alumni Steve Makris, GSB ’89, and Jerry Makris, GSB ’87.

Still reveling in the success of the party, the center held its third Solon and Marianna Patterson Triennial Conference on Orthodox/Catholic Relations at the Rose Hill campus from June 11 to June 13. The conference brought together international scholars—including Stanley Hauerwas, Ph.D., who was named “America’s Best Theologian” by Time magazine in 2001—to discuss the compatibility of Christianity and democracy.