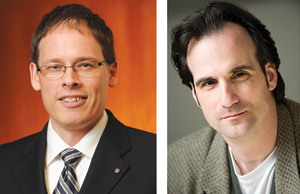 In the United States, less than 1 percent of people identify as Orthodox Christians—however, with an estimated population in excess of 260 million worldwide, Orthodox Christianity represents the second largest Christian tradition in the world.

Now, a grant secured by two Fordham scholars will help bridge the gap between the U.S. population and this important segment of Christians living in some of the most significant global hot-spots.

The Orthodox Christian Studies Center at Fordham University has received a prestigious challenge grant from the National Endowment for the Humanities (NEH), an independent federal agency and one of the largest funders of humanities programs in the United States. This marks the first time that the federal government has provided a grant related specifically to Orthodox Christian studies.

“The NEH grant is the strongest possible endorsement that the work of the Orthodox Christian Studies Center is unique, valuable, and necessary not simply for Orthodox Christianity or Catholic-Orthodox relations, but for the humanities writ at large,” said Aristotle Papanikolaou, Ph.D., professor of theology and co-founding director of the center.

The 3-to-1 matching grant requires the center to raise $1.5 million, which will be matched by a $500,000 award from the NEH. This resulting $2 million endowment will create the center’s Distinguished Scholar-in-Residence program and Dissertation Completion Fellowship program.

The new two programs will provide a unique opportunity for scholars and doctoral students. Both programs, which will eventually fund up to four scholars and two graduate students, are open to scholarship pertaining to orthodox studies in any academic discipline.

The Scholar-in-Residence program is unprecedented for the discipline, while the Dissertation Completion Fellowship program will become one of only two nationwide.

“Years ago, when we had first started thinking about the center, we realized that we could have the greatest long-term impact by sponsoring research, books, and conferences,” said George Demacopoulos, Ph.D., associate professor of theology and co-founding director of the center. “Now we want to create a space where scholars who are studying Orthodox Christian studies can have access to the resources they need to pursue their scholarship.”

Such scholarship, Demacopoulos said, is critical for engaging regions of the world—including the Middle East, Russia, and the Balkans—where Orthodox Christianity is the dominant expression of Christianity. A deeper understanding of orthodox culture is “fundamentally necessary” for those who wish to be involved in these regions through business, foreign affairs, or otherwise, he said.

Moreover, scholarship in Orthodox Studies would help to shed light on the complex relationship between Christianity and Islam, two religions that have typically been seen as pitted against one another.

“In many of these countries, there is a very complicated intersection of religion and politics, and religion and culture that is often entangled in interreligious conflict,” he said. “One possibility that this award enables is that the research that these scholars will do could inspire new ways of thinking about global citizenry and new ways of thinking about Muslim-Christian cohabitation.”

This is the first challenge grant earned by Fordham, which was one of only five institutions nationwide this year to receive the maximum award of $500,000.

“The grant speaks volumes about the quality of scholarship produced in the Orthodox Christian Studies program,” said Joseph M. McShane, S.J., president of the University.