The fellowship, which is part of the official campus ministry of the Orthodox Episcopal Assembly of North America, has chapters at the Rose Hill and Lincoln Center campuses. Thanks to Ibrahim and Boardman’s efforts, membership in the Rose Hill chapter has expanded significantly.

In October, Father Elias Villis, a priest at Christ Our Savior Greek Orthodox Church in Rye, N.Y., joined the group for a liturgical service at the Keating Blue Chapel. The group also invited Joni Zavitsanos, a painter influenced by Byzantine iconography, to campus to discuss her exhibit, “Distant Relatives: Ancient Imagery of the Classical Pagan Past and the Modern Byzantine Icons,” which is on view at the Walsh Library’s Museum of Greek, Etruscan and Roman Art.

Ibrahim, who is minoring in Orthodox Christian studies, comes from a family with Coptic Christian and Greek Orthodox roots. She was so interested in learning more about her faith that upon graduation from high school, she attended summer classes at CrossRoad Institute, an Orthodox College and Seminary in Boston. The minor, which is comprised of classes in disciplines as varied as classics, history, philosophy, and theology, situates the faith within a larger context of other faith traditions.

“Once I decided I was really interested in studying art history, I felt like New York was the best place for me,” she said. 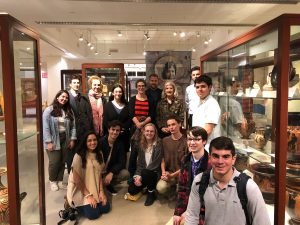 Students with Joni Zavitsanos, whose “Distant Relatives: Ancient Imagery of the Classical Pagan Past and the Modern Byzantine Icons,” is on view at the Walsh Library’s Museum of Greek, Etruscan and Roman Art.

“While I originally wanted to minor in religious studies, Orthodox Christian studies ended up being the perfect thing for me, because I knew I wanted to further understand my own faith in the context of other religions.”

A Place Where Faith is Taken Seriously

“Fordham really is a place where we want you to take your faith seriously. We don’t want college to be a period in which you sort of give up on church,” he said.

“We’re also the only center of our kind in the United States, and most of what we do is very high end, academic research. Students can combine intellectual pursuits with learning about how to be more socially active, and how to grow and maintain their faith tradition as well.”

The fellowship group has been active since the days before the center was officially formed.

“It’s the millennial group that’s really leaving institutional churches and organized religion, and part of the center’s M.O. is to provide a climate of information, knowledge, and education about Orthodox Christianity,” said Papanikolaou, the Archbishop Demetrios Chair in Orthodox Theology and Culture.

“One of the center’s missions is to provide outreach to students who are disaffiliating for a variety of reasons. They’re either unfamiliar with the works the church is involved in, or they have issues with the way institutional religions deal with various issues. We are one of the only places within the Orthodox Church in the U.S. that is willing to discuss controversial issues that are meaningful to this age group.”

Being a Part of the Journey

Father Villis said he was heartened by Ibrahim and Boardman’s efforts, which brought him back to campus after a year-long hiatus. Before that, he’d made the 17-mile drive to Rose Hill for 15 years to conduct liturgical services for students, often at 10 p.m.

“The students really respect that, because they see I’m serious. I’m unloading and loading all this liturgical stuff, and doing a full, formal liturgy at ten at night,” he said.

“I challenge them on their faith. I say, ‘These are the years that 90% of our people leave the faith. I want to be a part of that journey with them. I left the church as a teenager, and became an evangelical, born-again Christian before I came back. I’m very passionate about remaining and staying true to the church, because I went full circle with my journey.”

Liturgy and Academia, Complimenting Each Other

Although fellowship participation has waxed and waned depending on the enthusiasm of the students enrolled at Fordham in given year, Demacopoulos said participation in the minor has remained consistent, with an average of 10 to 15 students per year. Four years ago, the center helped developed some new academic offerings, and today, students can take courses such as Byzantine and Western Art, Medieval Jerusalem, and Russian Short Fiction. With more resources, he and Papanikolaou are confident they can increase enrollment to 50 students annually.

“It’s ideal for the business, communications, or biology majors who are not really interested in theology per se and would never choose it as a major, but who are Orthodox and want to learn more about their faith tradition,” he said.

Boardman, who is studying in Granada, Spain, this semester, had been active in her church through high school and is looking forward to participating in and organizing service projects with the group when she returns in the spring.

“I was slightly nervous before attending college that I would lose my connection with God and the church, but Orthodox Christian Fellowship has helped me grow in my faith beyond any other Orthodox activity that I have ever experienced,” she said.

Ibrahim said she hoped a vibrant OCF, as they call it, would make Fordham more attractive to prospective undergraduates of Orthodox backgrounds.

“Orthodox Christians are a minority in the U.S., so it’s important that people are aware that there are other forms of Christianity. We’re different, but not we’re not so different, and the whole purpose for the center, in my eyes, is the interfaith dialogue between Catholicism and Orthodoxy,” she said.

“And it’s important to have a presence on campus and a place where Orthodox students can go and feel welcome.”