skip to main content
Return to Fordham University
You are at:Home»Editor's Picks»New Chair Cites Avery Cardinal Dulles, S.J., as Guide for Inclusive Church
Fordham Provost Dennis Jacobs congratulates Christina Traina after presenting her with a medal commemorating her appointment to the Avery Cardinal Dulles, S.J., Chair in Catholic Theology. They were joined by Fordham president Joseph M. McShane, S.J., Terrence Tilly, and Eva Badowska.
Photos by Chris Taggart
In a lecture on March 24 at the Rose Hill campus, Cristina Traina, Ph.D., a professor of theology known for her research into Catholic feminist ethics, built on the scholarship of Avery Cardinal Dulles, S.J., to suggest a vision for a Catholic Church that is truer to the inclusiveness at the heart of Jesus’ vision.

Traina delivered her talk, “This Year’s Model: Updating Dulles,” after being installed as the second Avery Cardinal Dulles, S.J., Chair in Catholic Theology. The chair was established in 2009 in honor of Avery Cardinal Dulles, S.J., who was the Laurence J. McGinley Professor of Religion and Society at Fordham from 1988 until his death in 2008. The first holder of the chair, Terrence Tilley, Ph.D., professor emeritus of theology, was also present. 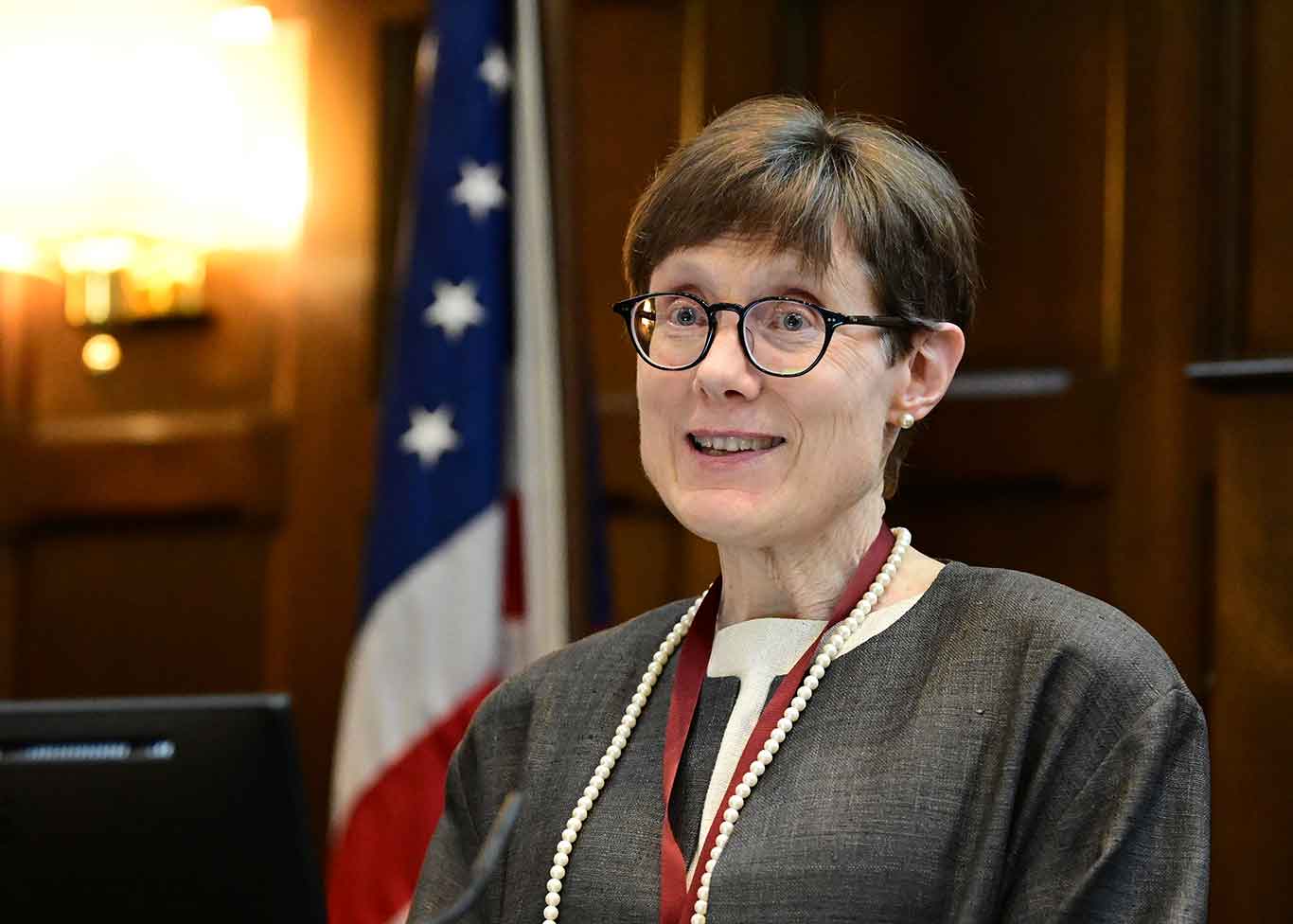 Traina began by noting that Cardinal Dulles’ groundbreaking book, Models of the Church, (Penguin Random House, 1973) was a perfect example of his “creative approach to ecclesiology,” because its use of models instead of strict definitions offered a path forward.

“His vocation was to help ordinary Christians understand and be inspired by the church so that we could embody it. Divided over gender and sexuality, abortion, racism, war, economics, and even sacraments, we need his wisdom now more than ever,” she said.

Dulles’ book described the church in terms of different models: an institution, a mystical communion, a sacrament, a herald, a servant, and a community of disciples. It was published right after the conclusion of Vatican Council II, which, Traina said, “let a thousand ecclesiological flowers bloom,” and encouraged Catholics to think about different ways of communing with God.

To the many ideas put forth about the church during Vatican II, she said, “Dulles replied that we should run toward multiplicity, not away from it. Because the church is a mystery—a graced reality beyond our full experience or knowledge in this life—only by embracing many simultaneously true visions of the church could we even begin to capture the church’s full reality,” she said.

The Woman by the Well

Traina said that during his life, Dulles knew that his own ideas—groundbreaking as they were at the time—would need to evolve. Building on his work, she suggested that an image of a Samaritan woman meeting Jesus in the Gospel of John, when seen through the lens of queer and feminist theology, inspires a vision of inclusiveness that the church aspires to but fails to live up to.

In the story, the woman was Jewish, as Jesus was, but as a resident of Samaria, she would have been eyed with suspicion by residents of Jerusalem. In the story, Jesus stops in the town and encounters the woman who, by virtue of being alone at noon, must be someone of “ill-repute.”

He offers her “living water,” in exchange for a drink from the well, but it is not until he tells her that he knows about her five husbands and her lover that she recognizes him as a prophet. Traina noted that womanist scripture scholar Wil Gafney has said that this is where “Jesus shows up in the place where private lives become public fodder…. where those who have been stigmatized and isolated because of who they loved and how they loved, thirst.”

“Jesus welcomes all whose loves the world shames,” Traina said.

What’s also relevant is that for a time, Samarians had worshiped the gods of five foreign tribes, even though, as the woman explains to Jesus, they firmly expected the Messiah. His knowledge of her “five husbands” is what lets him pass her test, proving he is the messiah.

In addition to showing that a person who is “only a lay person” can be theologically sophisticated, Traina also noted that the woman points out that Samaritans worship on a mountain, and not in Jerusalem, as the Orthodox Jews do.

“Jesus could have responded by saying, ‘That’s OK, we’re inclusive, from now on you can worship with us in Jerusalem; we welcome you to join us there.’” she said.

She noted that the time is right to reexamine Dulles’ models, because in recent years, American Catholics have given into a temptation that Dulles himself emphatically condemned, “sliding from acknowledging the church’s institutional dimension to equating church with “institution”—at the expense of its other essential characters.”

This has led to clericalism, which places all power in the hands of clergy; juridicism, which leads to excessive policing of who is “in” and therefore eligible for the benefit of the sacraments; and triumphalism, which Dulles wrote “dramatizes the Church as an army set in array against Satan and the powers of evil,” Traina said.

Catholics can look to the example of the woman at the well as they wrestle with the ways that race and sexuality get in the way of true inclusivity, she said.

“With respect to God, the distinction between Jerusalem and the mountain, between Israel and Samaria, has dissolved, for the Samaritans but also for the Jews in Jerusalem.  There is no inside, no outside. Rather, there is just “spirit and truth.”