The Great Seal of Fordham is inscribed with the words Sapientia et Doctrina.

Inspired by this motto, Patrick J. Ryan, S.J, Laurence J. McGinley Professor of Religion and Society, made it the central focus of this fall’s McGinley Lecture, which took place Nov. 15 at the Lincoln Center campus and Nov. 16 at the Rose Hill campus.

The lecture, “Wisdom and Learning: Higher Education in the Jewish, Christian and Muslim Traditions,” acted as a conversation between the traditions of the People of the Book, with Magda Teter, Ph.D., Shvidler Chair in Judaic Studies, representing Judaism, and Ebru Turan, Ph.D., assistant professor of history, representing Islam.

Father Ryan noted that the notion of wisdom is prevalent in all three religious traditions because it “enables us to attain to an overarching moral and spiritual perspective on our world.”

“It prompts us to discern how learning or knowledge should be used and how to live as perceptive and virtuous citizens of our world,” he said.

Just as the three traditions share spiritual roots, they also share educational ones; some of their structures of higher learning all come from the ancient Greeks. However, as the religions began to develop and change, so did their educational structures.

“The Jewish and Christian and Muslim traditions of education have diverged greatly on the detailed contents of their curricula,” said Father Ryan.

In the Jewish tradition, education is an important aspect of the faith’s identity, said Teter, who talked about the difficulties Jews faced in the modern era when entering institutions of higher education.

“Jews were excluded from education until the 19th century,” said Teter, “and even when they were accepted, many schools did not support Jewish studies—or forced the students to learn from the Christian perspective. They lost their identity in their own story.”

The Jewish response was to create its own educational institutions, which began to thrive in the early 1900s, she said. It allowed Jewish populations to continue spiritual instruction outside the synagogue and the home, creating the chance to integrate into society.

Islamic instruction, which is heavily based on the memorization of the Qur’an, embraced higher education because it standardized Muslim beliefs, said Turan.

“Higher education provided a cohesiveness and unity to medieval Islam,” she said. “It gave Islam a global identity.” 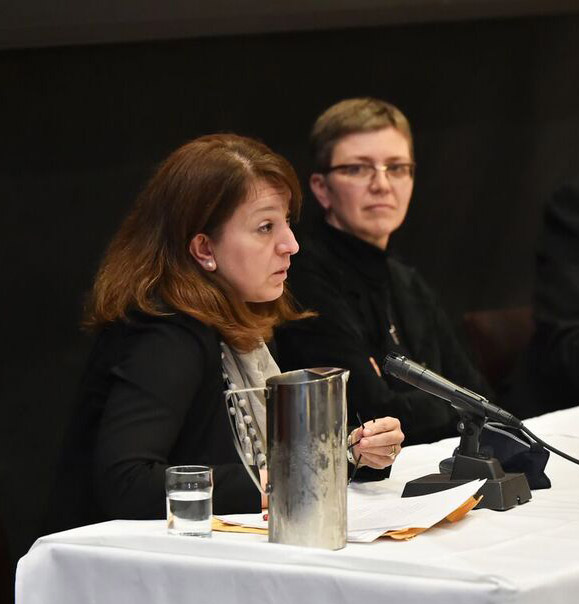 Turan also spoke about the political tensions in Islamic countries

Muslim schools called madrasas, derived from the Arabic word “to learn,” focused on law, theology and logic in their earliest iterations. Now, there are Muslim universities around the world that provide a diverse selection of study. Turan said that the translation of the Qur’an into other languages allowed Islam to be studied by a greater population.

“The translation . . . empowered Islamic education and opened it up to the rest of the world.”

In the Catholic tradition, Ignatius of Loyola, founder of the Jesuits, complimented university education with humanistic studies. By drawing from his own experiences at the University of Paris, Ignatius wanted to ensure that his students “went through systematic humanistic training in grammar, literature, and rhetoric.”

Jesuit education evolved around this foundation and now includes a diverse selection of fields of study. Father Ryan stressed that Ignatius’ humanistic training is ingrained in Jesuit education’s infrastructure.

“No one finishes any undergraduate college at Fordham without some exposure to philosophy, theology, literature, the natural and social sciences,” he said.

A Q&A segment following the lectures raised the question “Will the three faiths ever agree on the definition of wisdom?”

In response, the panelists laughed.

“We are all conscious that wisdom is important to our faiths and recognize it is something worth pursuing,” said Turan. “But besides that, I think we are fine agreeing to disagree.”