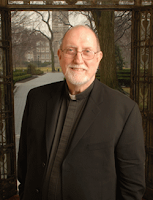 Patrick J. Ryan, S.J., the McGinley Professor of Religion and Society, is expanding his efforts to promote interreligious dialogue.

Father Ryan and Rabbi Daniel Polish, Ph.D., adjunct professor in the Graduate School of Religion and Religious Education, will team-teach a new course this spring that aims to create a literal as well as scholarly conversation between Judaism and Christianity.

The course, “Jewish-Christian Dialogue,” will examine the historical contexts of the two faiths to uncover areas of overlap and sources of difference.

“This course is good for Fordham students because it will help them reflect on the links that bind Jews and Christians in one of the major urban centers in the United States, where so many Jews and Christians live and work together,” Father Ryan said.

The course stands as part of Father Ryan’s larger mission to develop what he calls a “trialogue” among the three major monotheistic religions, Judaism, Christianity and Islam.

Father Ryan was appointed the McGinley Professor in 2009 after serving as Fordham’s vice president for University Mission and Ministry since 2005. For nearly half of his life as a priest, he held academic and administrative positions in Nigeria and Ghana.

Rabbi Polish is the spiritual leader of Congregation Shir Chadash of the Hudson Valley in Poughkeepsie, N.Y. An eminent scholar in interreligious affairs, Rabbi Polish has published widely in the field and served as director of education for Inter-Met, an interfaith seminary in Washington D.C.