skip to main content
Return to Fordham University
You are at:Home»Fordham Magazine»Lunch in the Neighborhood: A Conversation with Gregory Jost and Eileen Markey

Adjunct sociology professors Gregory Jost, FCRH ’97, GSAS ’05, and Eileen Markey, FCRH ’98, met at Urban Plunge when they were undergraduates at Fordham College at Rose Hill. That weekend service course in the Bronx for first-year students sparked a lifelong love of the borough that informs the courses the two teach at their alma mater today.

Last spring, Jost taught Community Service and Social Action. His students complete 30 hours of service in the Bronx at more than a dozen community-based organizations. Markey, who taught The City and Its Neighborhoods, had her students immerse themselves in the study of a particular Bronx neighborhood. Both will be teaching the courses again next spring.

Both raised outside of New York City, they are now raising families and working in the Bronx. Markey is an investigative reporter who teaches journalism at Lehman College; Jost is director of organizing at Banana Kelly Community Improvement Association, a housing-focused nonprofit in the South Bronx.

The two recently sat down with Fordham News at 188 Bakery Cuchifrito, a Puerto Rican eatery just off the Grand Concourse. As neighbors popped in to buy coffee, crispy chicharrón, tropical fruit drinks, and lottery tickets, Jost and Markey talked redlining and gentrification, as well as art, food, music, and all things Bronx.

TS: When did you feel like you were from the Bronx?

EM: It happened over time. I have a memory of coming back one summer, I must have been picking up a friend or something. I remember driving in on Kingsbridge Road and it being hot and hearing all the music from the street and thinking, “I really miss the Bronx.” In terms of moving here, I knew that I wanted to come to the Bronx because I knew this neighborhood from my time at Fordham and from the newspaper. We were young adults, recently married, settling down. This was the place where we were gonna live permanently now. And then a bunch of other friends moved into our building, other Fordham people who chose the Bronx, who stayed and who were all doing work here. Most of those families are still around. But I think an important transformation—when I stopped thinking of myself as a Fordham person who moved to the Bronx—was really when I had kids. Then you really belong to a neighborhood and you have to make all these moral decisions around schools.

TS: Gregory, what about you? When did you feel that you were from the Bronx?

GJ: I think the real shift comes when you realize that you and everybody around you are actually in something together, that these are all your friends, your neighbors. For me, it was a work in progress, because coming out of a strong service-oriented model I had a lot of issues to come to terms with around power, personally. I had to switch to a framework of not doing anything for people, but doing things with people.

TS: How can Fordham students distinguish their residential role from that of a tourist?

EM: It’s become more and more clear to me that the way we speak about neighborhood change and gentrification, we use the exact same terms as when talking about conquest. Terms like “pioneers of the neighborhoods,” or “settling neighborhoods,” or “I’ve discovered this neighborhood.” I don’t even like to use the word “explore.” I’m a journalist, so one of the students’ first assignments is to do what reporters do. It’s called a “beat note” of a neighborhood. When a reporter takes over a beat, you produce a big document about the geography, where the schools are, where the houses of worship are, who’s leading them, how old they are, etcetera. I’ve been really struggling not to use the word “guidebook.” I don’t want students to be part of tourism, which is really impossible to remove from a colonial history. A better way to say it would be “asset inventory,” because I want to get across this idea that neighborhoods have strengths. I think one difficulty is that students arrive in the Bronx and only see the problems. Sometimes that comes out of a decent, generous do-gooder instinct, but it doesn’t lead to good things. This neighborhood has tremendous strengths; it’s not a problem that you need to solve.

TS: As someone who lives and works in the Bronx, does it bother you when you meet students don’t know much about the borough and its past? 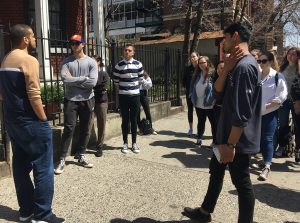 Jost’s students listen to leaders from the Northwest Bronx Community and Clergy Coalition.

TS: How do you teach that responsibly?

GJ: We’re really talking about power, and wealth is a piece of that. Students need to understand why there’s massive wealth disparity—opportunity disparities that exist even between students in the classroom, but then definitely between Fordham students and people who live in the neighborhoods surrounding campus. And that’s not just the history of the Bronx, that’s a history of the whole country.

TS: If that’s the case, how do students make the connection?

GJ: Most of the kids at Fordham, their parents used to live in the city, or their grandparents. You can see your family story in this natural story by asking, “Where did we live in the city? Why did we move out? How did we benefit from moving out? How were we able to build wealth through that?” Now I can come back into the neighborhood, and I’m in a position now to do service or just go explore—in a way that there is a power dynamic. If you’re not aware of that different power disparity when you’re going out into neighborhoods, you’re not going out in a responsible manner.

TS: What’s the difference between service learning and social justice?

EM: For me, when I was a high school kid at a diocesan Catholic school in Massachusetts, we did lots of community service. It was better than not doing community service, but it’s not as good as doing social justice work. When I came to Urban Plunge, we got this history lecture about the fires, the ’70s, disinvestment, and suburbanization. A lot of institutions pulled up stakes and left, but what Fordham did instead helped to found Northwest Bronx Community and Clergy Coalition, which helped the neighborhood, but from within. We were invited to be, and this is so cool, to be a part of history. 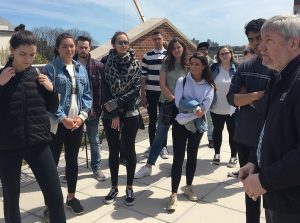 GJ: When I’m on a panel and we’re talking about gentrification, this is exactly what I’m talking about. If you’re doing service without acknowledging the power disparity and then doing something to rectify that, then we’re not actually solving any problems. We’re not dealing with the underlying issue. You want to be looking at the structures. There’s a structural injustice, there’s systematic injustice, and there’s a perfect corollary to that in Catholic social teaching: that’s a structural sin. It’s a good thing to go do service for a couple hours in the soup kitchen, but we need to dig deeper into what we can do to disrupt the systems that keep people relying on soup kitchens in the first place, and create a society where we don’t have that inequity.

TS: Could some of these disruptions simply be going out to a restaurant or concert or learning about the culture by simply participating in the culture?

GJ: The best Urban Plunge experience I ever witnessed was everyone walking up to Poe Park. It happened to be the day of one of those free live concerts and they got the mobile stage, and it was salsa music, and everyone was out dancing. There was no power dynamic present.

I mean, if you want to talk about the things that came out of Bronx, it’s music and food. In good times and bad times, from Latin jazz and doo-wop to hip-hop. All these different moments, there’s a ton of creation happening, something that people value. And so, this is where it comes to a value question and who has value to contribute.

TS: The Bronx is back and it is extremely attractive, suddenly, to investors. What now?

EM: All these good things are things that the people who survived fought for, and those things didn’t happen because white people from the Village wanted them. It is because people who survived organized and fought and demanded it. People fought tooth and nail for 20 years to reclaim their river and to reclaim their parks. If they don’t get to live there anymore, which is a hundred percent happening, it’s so awful because the only reason it’s nice is because the people who were there made it nice and fought for it to be nice, and fought for it against tremendous resistance.

GJ: It is so important to talk about like race and place, the reason neighborhoods were redlined was because of “infiltration” of people of color.

EM: Which is the term that was used on government paperwork.

GJ: There was a systematic devaluing of land based on the presence of people of color. And the flip side is that now when you have a piece of land that is attractive to white people there’s a system of mass displacement that’s generally pushing people of color around. You could say the Bronx is the last stand in New York City.

Jost and Markey on the Grand Concourse