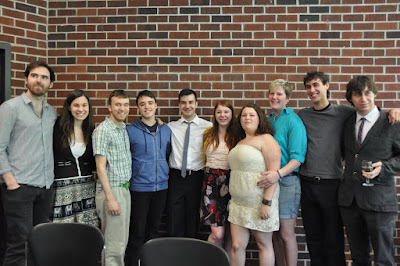 Several graduating seniors from the Lincoln Center campus earned applause and words of encouragement from a recent alumna, at a post-graduate public service commissioning held May 17. The students are headed out into the world to work with Jesuit Volunteer Corps, teach in inner city schools, study social work, help newly-released inmates transition into society, do public interest scholarship, and work with the United Nations to promote international education, among other things.

The group received encouragement from Betamia Coronel, FCLC ’09, associate coordinator for the Dorothy Day Center for Service and Justice. Coronel, a first-generation American whose mother, a trained nurse in Paraguay, worked domestic jobs to raise her, said a Fordham course on Urban Poverty helped ‘open my eyes’ to the injustices that underrepresented people face in America. She started organizing for better housing in poor New York City communities when she was still a Fordham student, she said, and she continues her service work at the Day Center. She encouraged the graduates to “listen to your hearts” when deciding which careers to pursue.

The event was sponsored by the Office of Mission and Ministry, which was sponsoring a similar event for Rose Hill campus students on May 18.