skip to main content
Return to Fordham University
You are at:Home»Colleges and Schools»Lincoln Center Campus Freshmen Moved by Words of Pope Francis

Laudato Sí, the landmark encyclical on the environment issued by Pope Francis last year, was the subject of a spirited discussion on Aug. 30 among members of the incoming Fordham College at Lincoln Center (FCLC) freshman class.

The discussion, which was held at the New York Ethical Culture Society, was led by Christiana Peppard, Ph.D., assistant professor of theology, science, and ethics, and Steven Stoll, Ph.D, professor of history. Students were required to read the encyclical over the summer, and share their thoughts on a university blog.

Peppard prefaced remarks on the document by noting its historical significance. Although the Catholic Church has long addressed environmental concerns, this was the first encyclical in which ecology is central, she said. According to the pope, ecology is a triad of important relationships: among human beings themselves, between human beings and God, and between humans and the planet that sustains them.

She said that the FCLC students were animated by the issues of modern anthropocentrism, ecological debt, the technocratic paradigm, and the commodification of water, according to postings on the blog.

The encyclical genuinely aspires to address every person on the planet, regardless of their faith, she said. 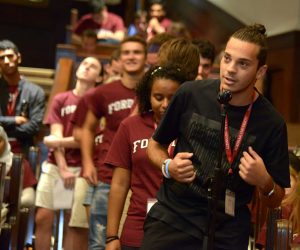 Students shared their thoughts for over an hour.
Photo by Patrick Verel

“You don’t have to be Catholic . . . to read, think about, and reflect critically and constructively upon what Laudato Sí might be saying,” she said.

Peppard and Stoll opened up the floor to the students, who addressed the room through two microphones.

One student from Hong Kong bemoaned the fact that a vista that her parents could once see clearly had become choked with smog by the time she grew up. A student from Brooklyn cautioned against assumptions that the planet needs help from humans for its own survival, pointing out that the earth has thus far survived many species.

Students who self-identified as conservatives expressed hope that the church’s reframing of environmental issues would help them to bridge the partisan divide in this country. A student who hailed from Berkley, California, lamented that Laudato Sí contained few concrete proposals. 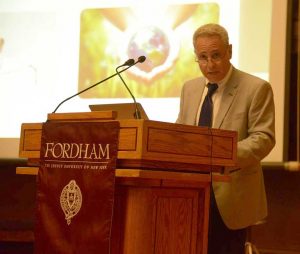 Stoll noted how Pope Francis explores the way we make things, and challenges us to think of the earth as a single human community instead of a set of nation states, commodities, or exchanges. If we did, he said, we’d reject the capitalistic notion that everything, including water, needs to be commoditized. This goes for the skies too.

“The atmosphere is not a commodity, and has not been commodified as such, but loading it with methane and carbon dioxide claims it as a necessary attribute to manufacturing,” Stoll said.

“Francis calls the atmosphere a ‘common good,’ giving no industry or corporation the right to reduce its capacity to sustain human life.”

Although the Pope’s Laudato Sí has attracted criticism from free-market advocates, Stoll said they miss the larger, more profound point that Francis makes of thinking as the world as one interconnected system; although sooty skies and urban abandonment have been vanquished in New York City, they are still very much issues in other places.

“The only truly outrageous notion we have about the world is that the present condition will continue indefinitely, that things will stay exactly the same. Imagining . . . a wider sense of well-being, and decoupling the earth from its commodity value, is an entirely new (view),” he said. 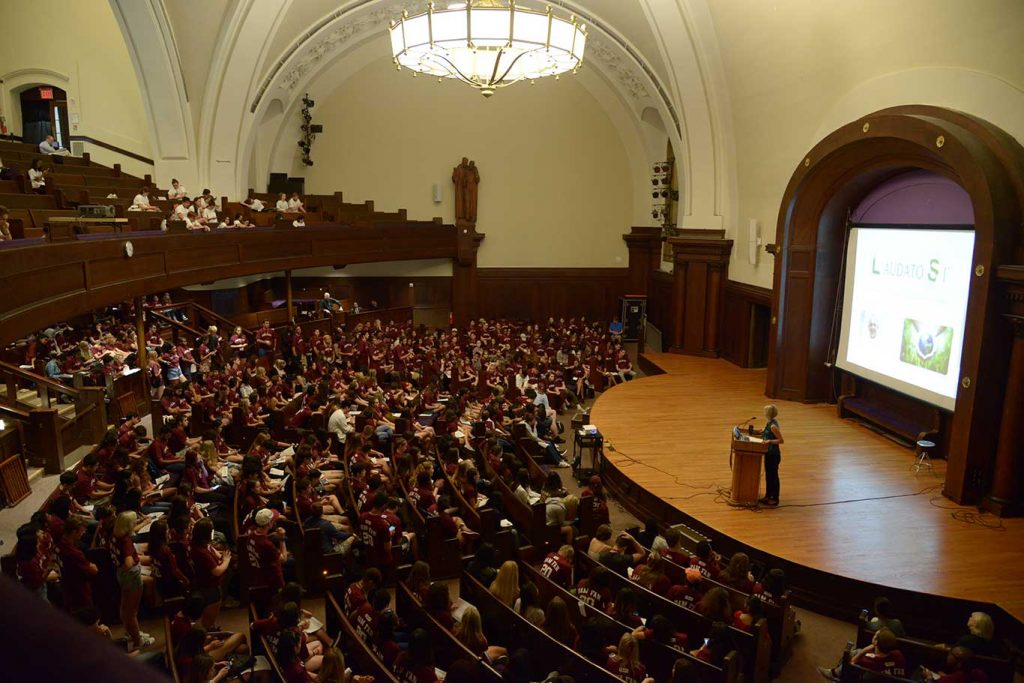