For writer, lawyer, and civil rights activist Michelle Alexander, the letter’s reverberations in the present day are clear. Reading King’s letter in advance of an Oct. 24 event at Fordham, Alexander found it “powerful and disturbing in many ways—how relevant it remains at this moment in history.”

Alexander joined the Rev. Bryan Massingale, the James and Nancy Buckman Professor of Theological and Social Ethics, before a packed audience at the Leonard Theater of Fordham Preparatory School for a poignant and at times pointed conversation on race and racism, framed around the lasting legacy of King’s message.

In rereading the letter for the first time in many years, Alexander said she was struck by King’s conception of nonviolent direct action as a method for “creating environments of tension in which a stark choice must be made.”

Alexander laid out the case for just such a stark choice to be made in her 2010 book on America’s criminal justice system, The New Jim Crow: Mass Incarceration in the Age of Colorblindness.

Of her work on mass incarceration, Alexander said, “I became obsessed with trying to kind of wake people up to see what our nation had done again—that we had managed to birth a new caste-like system in America and that it had happened on our watch, even as people who claimed to care about racial and social justice, for the most part, stood idly by.”

Alexander’s mention of idle bystanders took on added significance in the context of “Letter from a Birmingham Jail,” in which King addressed those who, “In the midst of blatant injustices… stand on the sideline and mouth pious irrelevancies and sanctimonious trivialities.”

The event, titled This Decisive Hour: Martin Luther King Jr.’s Theological Vision in a “Colorblind” Age, was the inaugural Fordham Theology 1000 First-Year Experience Lecture. The forum aims to bring together each of the approximately 2,500 Fordham undergraduates enrolled in the first-year theology course Faith and Critical Reason around a common topic. Students had studied King’s “Letter from Birmingham Jail” in class before the lecture.

A Political and Spiritual Question

The political and the transcendent are intertwined in Alexander’s conception of justice. “The challenge of American democracy, in my view, is a spiritual challenge,” she said.

Father Massingale agreed. “The core spiritual, moral challenge posed to us by mass incarceration, by racism, by systems of racial control,” he said, comes down to this question: “Do we have the will to care for someone who does not look like us?”

Or, in Alexander’s framing: “Is this what you would wish for yourself if you were poor and hungry?”

“If the answer is no, then we have a responsibility at that point,” she continued. “And I think many of us avoid the question because we don’t want the responsibility that that question implies—the responsibility of actually having to do something to change it.” In the process we must reflect inward and confront hard truths, Alexander said, including truths we find convenient to ignore. This notion of responsibility, she noted, lies at the heart not just of Christianity, but of many of the world’s faiths. 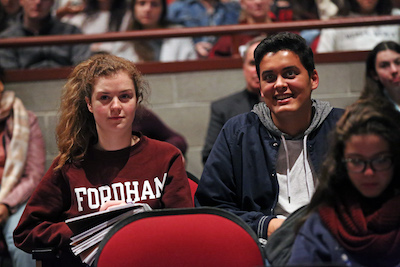 This aspect of Alexander’s message resonated with Ally Lambie, a first-year student at Fordham College at Rose Hill. “She talked about how some of us are ignorant to what’s going on and it made me realize that I’m sometimes one of those people,” Lambie said after the lecture. “Now I’m going to go out and try harder to understand where other people are coming from.”

‘Our Time Is Limited’

In his letter, King wrote, “We must use time creatively, in the knowledge that the time is always ripe to do right.”

Like King before her, Alexander finds resolve in the knowledge that our time is limited and our future is unwritten. “For me, it’s a deeply spiritual question,” she said. “Who do we want to be and what do we want our lives to be about in the short period of time we’re here on Earth?”