skip to main content
Return to Fordham University
You are at:Home»Faculty Profiles»“In the Name of the Mother?” Theologian Unearths Female Language for God in Traditional Interpretations of Scripture

For Roman Catholics who have spent a lifetime imagining God as a father figure and praying in the name “Father,” ” Son,” and “Holy Spirit,” this gender reversal might sound jarring.

But Shannon McAlister, PhD, studies those saints and Doctors of the Church who ask: “Why?”

McAlister, an assistant professor at the Graduate School of Religion and Religious Education (GRE), explores the use of female language to describe God—God as “her” instead of “him”—particularly within the western patristic and medieval Catholic tradition. 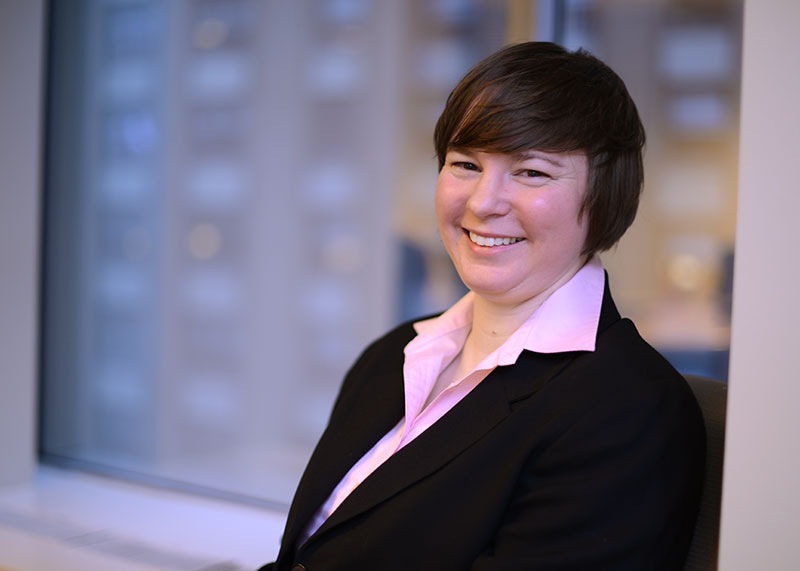 Shannon McAlister is an assistant professor at the Graduate School of Religion and Religious Education. Photo by Joanna Mercuri

Despite the unfriendly conditions that women often endured during the Middle Ages, McAlister has found ample evidence that medieval theologians embraced diversity in the gendered language they used to refer to God.

“There are many scripture passages that refer to God with a variety of female terminology,” said McAlister, who teaches in GRE’s Christian Spirituality program. “For instance, in the Wisdom Literature, wisdom is sometimes portrayed as a divine figure, and depicted in female terms—sophia in Greek, or chokhmah in Hebrew. Other passages describe God as conceiving and giving birth.

“My work is focused on retrieving the history of those passages and showing that this language isn’t just on the margins of medieval theological thought—it persists at the center of institutional medieval theology.”

A retrospective study such as this is important within the field, McAlister said. Because modern Catholic thought is very much grounded in tradition, the insights of past scholars still carry weight in current theological debates. At the same time, the Church’s updated, more progressive views about gender equality create a dilemma for some contemporary theologians, who struggle between upholding tradition on the one hand and feeling dissatisfied with exclusively male language on the other.

By uncovering scriptural interpretations that employ female imagery and the theological scholarship based on these images, McAlister offers a model for thinking and talking about God in a more expansive way. And this, some feminist theologians say, may help set the tone for how women are regarded in the church.

“In all of the medieval texts I’ve studied, there are multiple instances of using female imagery for God, both in the grammatically feminine words of the text itself and in the images inspired by the text… for instance, God as creatrix sapientia, literally, ‘Creatress Wisdom’,” she said.

“These scripture passages that refer to God in female terms… can stand as precedents within our current speech for God.”

My work is focused on… showing that this language isn’t just on the margins of medieval theological thought—it persists at the center of institutional medieval theology.
However, McAlister said, the fact that medieval theologians were comfortable using some female language for God does not imply that their attitudes toward women were equally charitable.

McAlister pointed to a medieval discussion over whether God might be referred to as “Mother” or “Daughter” in the same sense as “God the Father” and “God the Son.” The idea was ultimately rejected based on the medieval understanding of biological fatherhood and motherhood—that the father is the primary genitor who provides the form for a child, while the mother is a secondary genitor who passively receives that form without playing the active role in conception.

On this reasoning, motherhood is inferior to fatherhood—and an inferior descriptor for God.

“Using female language for God could help women appreciate their inherent dignity as reflections of God,” McAlister said. “However, there’s more we need to do to help women understand their dignity and move into roles that express that, or to create environments in which women are valued equally.”

For modern Catholics, the increasing recognition of women’s equality means that a wider vocabulary for God is a practice that many contemporary theologians advocate. While that may not resolve all issues relating to gender equality, it can be a good start.

“I think that retrieving the history of this type of speech about God provides an example for those who wish both to preserve the wisdom of the Christian tradition and also to broaden their images for God to include female as well as male,” she said.