skip to main content
Return to Fordham University
You are at:Home»Living the Mission»With Manhattan Interfaith Ceremony, President Tetlow Kicks Off New School Year
Photos by Chris Taggart and video by Taylor Ha
Tania Tetlow, president of Fordham, struck a unifying note for a diverse community as she welcomed the new school year with an interfaith prayer ceremony that was open to all.

“There’s much that I’ve learned about how we really understand our own faiths when we understand the wisdom of other religions as well, and we make each other stronger in doing this together,” said Tetlow at the “Prayer and Picnic with the President” gathering, held on the Plaza at Fordham’s Lincoln Center Campus on Aug. 31.

Moments before speaking, Tetlow sang Ben Steinberg’s “Oseh Shalom,” a Hebrew song of peace. She recalled learning it when she was hired as a soprano at a local synagogue in New Orleans. She said that going to the services there helped deepened her Catholic faith.

“There is a reason that the world’s great religions overlap in so many fundamental principles,” she said.

For thousands of years, humans have sought out God, been fueled by faith, and have come to a basic understanding, she said.

“We are designed as human beings to love each other—and that means not just our own families and not just our own communities,” she said. “All of the world’s great religions have in common the exhortation to welcome the stranger, to understand that every human being is our brother and sister, rooted in fundamental dignity, worthy of respect, and more than that, worthy of love.”

Amidst the honk of horns and sirens emanating from Columbus and Tenth avenues, as well as the occasional helicopter, Tetlow acknowledged the diversity of the millions living just a few square miles from campus. A quick glance at the crowd reflected that diversity, not just of race and religion, but of the Fordham community as well. Representatives from the Ailey School joined deans from Fordham College at Rose Hill, the Law School, and Fordham College at Lincoln Center, as well as nurses from Health Services, curators, artists, scientists, facilities staff, and, of course, students.

For many, it was their first encounter with the new president, who brought her daughter, Lucy, to the ceremony. For others, it was also the first time seeing the plaza used in a ceremonial fashion. A temporary stage called attention to the decades-old wisteria arbor at the Plaza’s western edge. Just a few summertime blossoms still clung to the vines. Adirondack chairs formed a semicircle leaving a green space in front of the stage for Ailey students to dance two pieces. And FCLC sophomore Isis Poulose performed a traditional Hindu dance to the Shiva Panchakshara Stotram, a devotional chant to Lord Shiva set to music.

Karina Martin Hogan, Ph.D., associate professor of theology, acknowledged that the land the Fordham community enjoys today was the land of the Lenape people. She shared the Anishinabe Water Rite, which was taught to her by her father who came from the Ojibwe tribe in today’s northern Wisconsin. In addition, there were moments set aside for mediation and gratitude. The ceremony also included music from China, “Mo li Hua,” and a piece for piano with a dissonant riff on the Shaker hymn “Simple Gifts.” 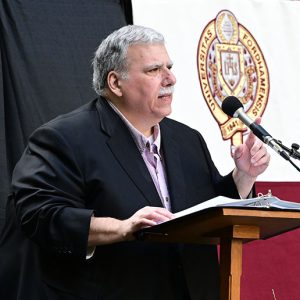 Before delivering a reflection, Vin DeCola, S.J., assistant dean at Gabelli School of Business, offered a humorous and alliterative homage to welcome the new boss.

“Isn’t it terrific to have this timely transition to a top-tier trailblazer, Tulane-trained, tremendously-talented, totally tuned-in Tania Tetlow toiling as ‘tirty-tird’ topbanana—and she’s talmudically tuneful too. Today a tourist—but tomorrow, toast of the town!”

Father Vin, as he is known to the Gabelli School family, said that he appreciated the moments of gratitude in the afternoon’s ceremony, a time-tested practice of St. Ignatius, founder of the Jesuits. He noted that gratitude makes one humble and calls attention to life’s many gifts, including the Fordham community. Yet, Father DeCola also acknowledged that we live in challenging times, including an awakening to the truth of centuries’ worth of unjust social structures around gender inequality and racial discrimination. He added that while some may welcome change, others who have benefited from the oppressive structure will fight to maintain the status quo.

Students from the Ailey School performed to piece for piano that riffed on the Shaker hymn “Simple Gifts.”

“Some find such times of social change quite threatening and, sadly, sometimes feel threatened to the point of triggering a reaction of violence—real or legislative violence,” he said.

Among the many changes he cited was the shift from the 1970s, when men composed nearly 60% of the student body, a trend that has flipped at Fordham, with this year’s class composed of 63% of students who identify as women and 37% as men. In addition, he noted that the very notion of binary gender categories has evolved, with many who are uncomfortable with binary categories altogether.

“Their discomfort raises important and helpful questions for all of us to face,” he said. “What can I learn from those who call into question such black and white categories? Don’t we all benefit by accepting that life is not so black and white, but rather, thank goodness, is a spectrum of colors which, when embraced, make us all more beautiful?”

He noted that while he remains worried about the world incoming students will encounter upon graduating, he still has faith.

“Yes, we live in complicated times, but you give me hope, great hope,” he said to the students. “You and this community gathered here are reason for hope.”