skip to main content
Return to Fordham University
You are at:Home»Faculty Profiles»In African Churches’ Mass Media Use, a Glimpse of a Changing Global Christianity

When she first went to Ghana as a graduate student, Kimberly Casteline found a society suffused with Christian messages—on billboards, on secular radio, and in many unexpected places.

“You would have people handing you fliers (on the street) about church services, all-night prayer vigils, and all kinds of things having to do with religion,” said Casteline, Ph.D., assistant professor of communication and media studies. “Half the day Saturday is filled up with televised sermons. A little stand selling food would have a name like ‘23rd Psalm Snacks.’” 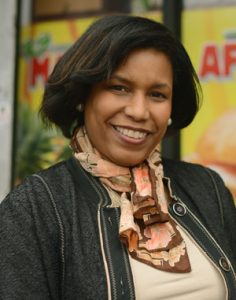 “Religion is very much a part of the public sphere. It’s a part of the common discourse through mass media,” she said. “Literally, you see it everywhere.”

Such practices offer one example of how global Christianity is being reshaped by people from the developing world who are actively using mass communication tools to build their churches in their home countries and abroad, said Casteline.

Casteline’s trip to Ghana was part of her dissertation research into media use by Ghanaian Pentecostals in diaspora—in particular, those in Aurora, Colorado. One pastor, for instance, used cable access television to film his weekly service and send it to stations around the country, complete with subtitles and his web address scrolling at the bottom of the screen.

He also ran a radio show and a toll-free prayer line that fielded calls from as far away as Toronto. His congregation, meanwhile, numbered only about 50.

“You don’t see a church of 50 members doing anything like that” in America, Casteline said. “Most small churches have maybe a website that might get updated … every blue moon, once a year, but for the most part, American churches are not very media savvy.”

She’s seen Ghanaian Pentecostals using a variety of media in America. Pastors she has interviewed reach out to her regularly via text message and voice mail. Young Pentecostals in the Bronx started a Pinterest page that reflects the “Afropolitan” experience of Africans who have lived in diaspora for years, she said. Others are promoting their message through Facebook pages, tweets, and online videos.

These and other practices are an outgrowth of the “heavily mediated environment” in Ghana, she said.

“Ghanaian Pentecostals in diaspora are replicating practices found in the homeland, and … they are also going beyond what’s done in the homeland in order to take advantage of resources found in North America (and) Europe,” Casteline said. “As these populations increase in North America and in Europe, and as they gain access to more and more resources … we will see a change in North American Christianity as a whole. That change is already being felt in Europe, in that more African Christians are going to church and more are participating in the Christian life than are the European natives,” she said.

One reason African Pentecostals are at the leading edge of this proselytizing is the example set by televangelists, mainly Pentecostal, who came to West Africa in the 1970s, Casteline said. African pastors adopted this Western model, turning to television, printed brochures, and eventually other types of media.

Casteline plans to further study those Ghanaian Pentecostal communities abroad that not only use media well but also show a strong international bent.

“A lot of times they’ll start the church in their living room with friends and family, and friends of friends,” she said, “Then they [create]these ties with other churches around the world.” Sometimes the new networks will play host to each other’s pastors, she said.

“The churches have this way of worshiping and way of practicing Christianity that is just very different from traditional Western ways,” she said. “Even a storefront church will be called something like ‘World Tabernacle’ or ‘International House of Prayer.’ And literally, it’s 50 people. It’s a completely different mindset.”

Over the summer she visited churches in London and the Netherlands and interviewed pastors. Next year she’ll go to Padua, Italy, where Pentecostals are already making their mark in the public sphere via billboards and public advertisements.

“It’s very interesting, because it’s in the heart of Catholicism,” she said.

Ironically, by forming their own churches Africans are carrying out a kind of “reverse” missionary activity in Western countries, she said—in part because they see Western Christianity as lax.

“The pastors tell me, ‘We want to reach the world, and I know God has brought us here because the West has lost its way,’” Casteline said. “‘Yes, the West brought us Christianity, but now we’re bringing it back to them.’”