At a time when there has never been a greater need for humanitarian aid workers, Fordham’s Institute for International Humanitarian Affairs sent forth one of its largest classes ever in a ceremony on June 26.

Commencement speaker David Rieff, senior fellow at the World Policy Institute at the New School for Social Research and member of the Council on Foreign Relations, sketched out a daunting scenario that many graduates—who hail from countries such as Syria, Sierra Leone, and Pakistan—are well acquainted with.

“I think its fair to say that this global crisis of displacement is really unparalleled since the period immediately after the last world war,” said Rieff. “People are now on the move everywhere, and it isn’t simply the publicized crisis in the Mediterranean. It’s the Rohingya and the Bangladeshis, too.”

In Central America, he noted, the nations of Guatemala, Honduras, and El Salvador are also in a “freefall.”

“There is much more movement in the Americas than perhaps the headlines would have you believe, and there will be more to come,” he said. 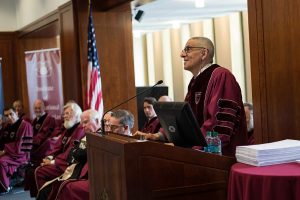 What’s particularly challenging is that the United Nations has been incapable of sustaining peace, he said, and though the UN High Commissioner for Refugees and the World Food Programme have been successful, their continued success is not a given. When it comes to funding, Rieff said, the public is like a serial monogamist—unable to pay attention to more than a one crisis at a time.

“We now have a global order whose characteristic elements are no longer grounded in law fit for the crisis,” he said. “And that puts on all of you a hugely added burden, because you are in effect navigating in contexts that—to use Marx’s famous phrase—‘All that is solid melts into the air,’ in which the law you think you can rely on actually turns out to be quite unreliable.”

He told the graduates that in spite of all the problems within the humanitarian aid systems, “you are in a very essential way the people standing between what we have now, and complete barbarism. What you do has never been more essential, and never required more heroism and more intelligence.”

Simon Clarke, the student speaker, joked that the students were “darkly warned” about joining IDHA’s “family” when they first arrived on May 31.

“It’s like being indoctrinated into a secret society—the most egalitarian one I’ve ever seen, representing both sexes, all sorts of languages, colors, creeds, and faith,” he said. “[But] we will know each other not through a dodgy handshake but through a laugh and a hug.”

“Don’t forget—Einstein was a refugee,” he said.

Visiting Professor of Humanitarian Studies Larry Hollingworth said he hoped the program’s graduates are leaving with a greater love, endearment, and respect for humanitarian aid beneficiaries.

“If we have convinced you of that through the course, then go and restore some degree dignity to the beneficiary, and everything will have been worthwhile.”

Read about some of the IDHA graduating class here.