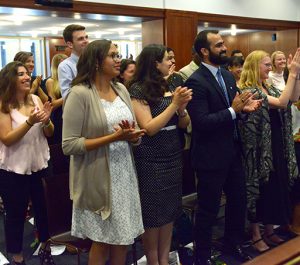 Students gave their instructors a standing ovation at the ceremony.

Dr. Cahill received the medal from Joseph M. McShane, SJ, president of Fordham, following the commencement ceremony for students earning the International Diploma in Humanitarian Assistance, one of the IIHA’s flagship programs.

In awarding the medal to Dr. Cahill, Father McShane noted that the award has been given only 36 times in Fordham’s 175-year history.

Dr. Cahill’s long career as an expert in tropical medicine has taken him to four continents and 65 countries—Somalia, Egypt, Lebanon, Nicaragua, and Sudan among them. His interest in improving humanitarian aid led him, in 2001, to found the IIHA at Fordham in partnership with the Center for International Humanitarian Cooperation,  with the goal of advancing the methods and framework by which humanitarian workers operate. He continues to serve today as IIHA’s director and as a professor.

Father McShane described Dr. Cahill as “a man who has never lost a passion for serving the poorest of the poor and the most marginalized in society throughout the world. He is, to me, a hero.”

He said that, in spite of Dr. Cahill’s many accomplishments—he has written or edited more than 30 books, been a longtime U.N. adviser, served as chair of New York State’s Health Planning Commission, and is on the faculty of three universities—the doctor did not think he was worthy of receiving the President’s Medal.

At Father McShane’s continued encouragement, Dr. Cahill finally agreed, as long as the award could be presented at the modest and intimate IDHA commencement.

“He chose the ceremony that meant more to him in all the years and for the program whose work means more to him than anything else, besides his family,” said Father McShane. “It speaks volumes that he chose to receive the medal here.” 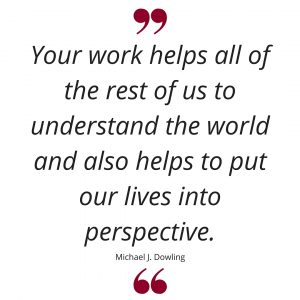 He added that Dr. Cahill and his program are the embodiment of “all the principles on which the University was founded and to which it devotes itself every day.”

Also receiving awards, in the form of diplomas, were 41 humanitarian aid professionals from 27 countries, representing 36 organizations, and working in 26 countries around the globe. The cohort had just finished an intense 30 days of instruction aimed at bringing best practices for those who work on the ground in the some of the world’s most dangerous places.

In his commencement address, Michael J. Dowling, GSS ‘74, president and CEO of Northwell Health, praised the graduates for “saving lives.”

“Your work helps all of the rest of us to understand the world and also helps to put our lives into perspective,” he said. “You rekindle our desire to do more and to do better.”

Dowling said their work as humanitarians helps others understand the interconnectedness of the world. In his position at Northwell, he observed that the Ebola epidemic made many in government and/or healthcare service to realize that “what happens in parts of Africa can [happen]here in one day.”

The training students receive in the program is becoming the standard in disaster management, he said, a field that is far more professional than in the past and one that is developing into a science. He stressed the importance of modifying plans when the unexpected happens—to have more than one communications plan, and to debrief after an event in order to plan for future events.

“There will be other crises here, as there are abroad,” he said. “But each event should be seen as a learning experience.”