With rising topics such as gender rights, sexual fluidity, and poverty under discussion, the U.S. Catholic Church has been experiencing internal conflict among factions that often have no roadmap to finding middle ground. 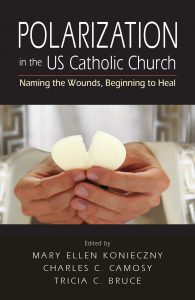 A new book co-edited by Charles Camosy, Ph.D., aims to start the conversation.

Camosy, associate professor of theology, edited and contributed to a collection of essays entitled Polarization in the U.S. Catholic Church: Naming the Wounds, Beginning to Heal (Liturgical Press, 2016) alongside Mary Ellen Konieczny, Ph.D., of University of Notre Dame, and Tricia C. Bruce, Ph.D., of Maryville College.

It confronts topics U.S. Catholics find themselves avoiding in debate and attempts to set the atmosphere for a peaceful discussion.

“Part of the reason for the book is to give people different tools for talking—categories and tools that are more complex and nimble than a shallow liberal-against-conservative binary,” said Camosy.

The book was born out of a conference of the same name that began on April 27, 2015. Theologians gathered at the University of Notre Dame to discuss the lack of solidarity in the U.S. Catholic Church and how to bring people back together.

“Polarization, most foundationally, artificially pits ‘one side’ against ‘the other side.’ This sets up an antagonistic way of being in the world—one that has all kinds of harmful effects. It doesn’t do justice the complexity of the debate. It refuses to see common ground.”

A variety of essayists contributed to this anthology, including theologians, sociologists, bishops, university presidents and members of the media. Most notably, John I. Jenkins, C.S.C., president of the University of Notre Dame, and Most Rev. Daniel Flores, bishop of Brownsville, Texas, contributed thought provoking essays on the state of current American Catholicism and its future.

“The book focuses a lot on what’s next,” said Camosy. “Millenials and the next generation, the demographic shift towards Latino Catholics—the book talks about a lot of interesting and necessary things.” 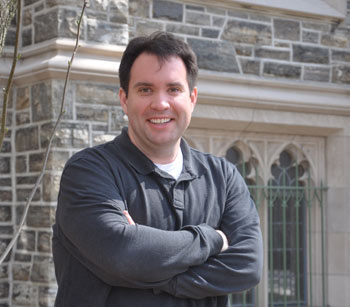 In Camosy’s written contribution to the book, “Resisting Polarization: Naming a Moment of Hope,” he further explores Catholics’ tendencies to develop an “us-against-them” mentality when it comes to prioritizing certain issues over others, especially concerning conflicts between pro-life and social justice activists.

“Catholics often forget our basic duties to be faithful to the commands of Christ and His Gospel,” he said. “It is good to be active in politics, but only if we are able to keep in mind that our ultimate loyalty as Christians is to a kingdom that is ‘not of this world.’”

“Look for the places you agree first instead of leading with what you disagree with. Christ commands us to love and He even gives us a specific command to love those we imagine to be our enemies.”