skip to main content
Return to Fordham University
You are at:Home»Living the Mission»Hajji Mama: Women and the Christian Pilgrimages of the Ottoman Empire
Above: Lecturer Valentina Izmirlieva (left) with respondents Sarit Kattan Gribetz (center) and Ebru Turan (right) at the “Hajji Mama” lecture at Rose HIll on March 8. Photo by Michael Dames
On the evening of International Women’s Day, an intrigued crowd gathered in the O’Hare Special Collections Room at Walsh Family Library to consider a long-forgotten history of women as agents of intercultural exchange and social mobility, arbiters of the sacred, and bearers of religious favor for their communities. The March 8 lecture, titled “‘Hajji Mama’, or the Christian Family Hajj to Jerusalem,” was sponsored by Fordham’s Orthodox Christian Studies Center.

Valentina Izmirlieva, Ph.D., chair of the department of Slavic languages at Columbia University, came across the history while conducting research on the phenomenon of Orthodox Christians in the Ottoman Empire who adopted and adapted their Muslim neighbors’ custom of undertaking a pilgrimage, or hajj. These Christian pilgrims traveled not to Mecca but to Jerusalem. Upon return to their homes, those who completed the trip were given the honorific title of hajji—one who has completed the hajj— which conferred respect and permitted them a privileged position within their own communities and among their Muslim neighbors, even as religious minorities. 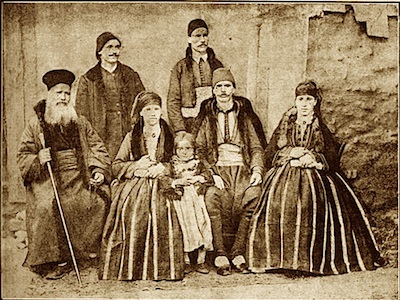 Historians of the Balkans and the Ottoman Empire have long been familiar with the Christian hajjis, Izmirlieva said. But, like so many aspects of history, the Christian hajj has been understood as an exclusively male endeavor.

“You may ask: How come no one noticed these women before? It’s partly because the available hajji sources hide their women well,” said Izmirlieva, whose work focuses on religious and cultural exchange in the Ottoman Balkans. “In short, recovering these traces, and the experiences they stand for, is a laborious task of cultural archeology that requires much archival digging and then some creative detective work. But most of the problem lies elsewhere, in a disciplinary inertia: No one really expects these women to be there—so no one has been looking for them.”

Through painstaking research, Izmirlieva uncovered the existence of dozens of women—grandmothers, wives, pregnant women, teenage girls—in the beginning of the 19th century alone, who traveled with their husbands and sons. By the later part of the century the arduous trip had been simplified by steam ships and reduced taxes, and the number of hajjis, male and female, skyrocketed. There is documentary evidence of women making the Christian hajj as early as 1682, but by the early-19th century the family journeys had taken on a distinctly feminine cast, Izmirlieva said.

These women travelers visited many sites in Jerusalem pertaining to Mary, mother of Jesus, in the hopes of boosting fertility and solidifying a connection to the life of Christ. They became conduits of the sacredness of Jerusalem to their families and communities, Izmirlieva said. On the months- and years-long hajj, it fell to the mothers to enforce orthodoxy—to make sure their families prayed at the correct times and observed the appropriate rituals, even in foreign places. When they returned home, their social status had changed. Even a young wife, she said, generally a person of little respect and subject to the authority of her mother-in-law, was now addressed with deference, called hajji even by old men. By distributing to churches, monasteries, and extended family the relics and Holy Land mementos the family had spent most of its money to acquire, the mama hajji burnished the family’s reputation. She also positioned her sons to be respected members of the community, ready to step into positions of secular leadership when the Balkan nations gained independence from the Ottomans in the late 19th and early 20th centuries.

Izmirlieva believes the “hajji mama” story is worth considering during the current moment of heightened nationalism and fraught interaction between Christians and Muslims because it offers a historical example of successful interaction and negotiation between cultures.

“We think of coexistance of groups in two polar opposite models: It’s either clash of civilizations or a ‘Kumbaya’ model of erasing difference. In reality it’s more complicated. It’s in the middle,” she said.

Fordham history professor Ebru Turan, Ph.D., offered a response focusing on the geopolitical antecedents and implications of the Christian hajj. She wondered how Balkan Muslims, watching their own empire fade as Christian European nations expanded their political and economic influence in Jerusalem, felt about their Christian neighbors appropriating the title of hajji. “To what extent were the new hajji part of the general European, Christian expansion into Jerusalem?” Turan asked. “What did the Muslim neighbors think, seeing Christian merchants usurp this title and come home with all this status?”

Sarit Kattan Gribetz, Ph.D., a Fordham theology professor, offered a response focusing on the biblical language used to describe Jerusalem as a woman, a mother, a grieving princess. She recounted the ancient queens who ruled the city and the female philanthropists—from St. Helen, mother of the Roman emperor Constantine and founder of the true cross, to early modern heiresses—who funded the preservation of historic sites. She argued the mama hajji story is but one in a history of Jerusalem as a city of women. Kattan Gribetz praised Izmirlieva for uncovering a piece of women’s history and providing a fuller and more accurate picture of a period and a society.

“The project of recovery is part of a larger historiographical effort to repopulate the histories we write, and the stories we tell, with those who were there, and who played important roles, but who were left out of the narrative,” Kattan Gribetz said.