skip to main content
Return to Fordham University
You are at:Home»Living the Mission»Gun Violence Survivor Works with Timothy Shriver to Heal Divisions in Society
Timothy Shriver and Lamont Young
Photo courtesy of Lamont Young
In 2018, Lamont Young fulfilled a long-held promise he made to himself when he earned a master’s degree in mental health counseling from Fordham’s Graduate School of Education.

A year later, Timothy Shriver, Ph.D., a former chairman of the Special Olympics who counseled Young in the early ‘90s, spoke at Fordham’s Commencement ceremony, telling graduates that if they transform themselves, they can “transform the world.”

Now they’re transforming the world together through a group called UNITE, founded in 2019 with the goal of helping Americans overcome division. In May 2020, organizers staged Call to Unite, a live online fundraiser that raised more than $85 million dollars for the charities GiveDirectly and Points of Light. GiveDirectly lets donors send money directly to the world’s poorest residents, while Points of Light coordinates with a network of volunteer-mobilizing organizations in 37 countries around the world. 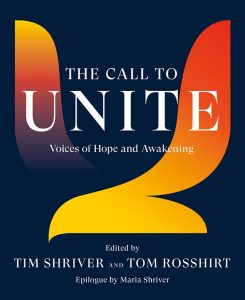 As part of that event, Shriver interviewed Young and his mother Glenda about how Young managed to forgive his assailants after being shot seven times point-blank in the chest in 1993. The interview was published in The Call to United: Voices of Hope and Awakening (Penguin Life/The Open Field, 2021) a volume of poems, essays, prayers, and insightful conversations published in March.

“A mother who raises a son who can take on the hardscrabble and often fatal streets of New Haven and not only come through it but come through it with forgiveness and an open heart, that’s a mother I want to learn from,” said Shriver, who met Young when he led a young men’s group in the Connecticut city, rampant with gangs and drugs at the time. The pair spoke to Fordham News during a joint Zoom call.

Carrying the Power of Painful Lessons

“Lamont’s crossed every divide, and he can carry the power and passion of what he’s learned by doing that. They’re painful lessons sometimes, but those are the divides we all have to cross.”

“There are millions of Americans who are eager to cross boundaries, to live with a sense of dignity and respect for other people, and solve big problems,” he said.

“Our vision was to create a meeting space for people, and that’s what led to this great outpouring in May of stories and experiences where people said, “Here’s how I would do it. Here’s the way I would respond. Here’s how I would work to cross boundaries.”

Since graduating from the Graduate School of Education, Young has held several positions and internships in the counseling field. Currently, he does research on dignity and respect for UNITE, works with the homeless in New Haven at Columbus House, and provides psychotherapy for clients at Reliant Behavioral Health Community Service, a social service agency. Being part of the UNITE group has been transformative, he said.

“I went in with this psychological approach to addressing the human condition and suffering caused by racism and discrimination. I had a burning desire to promote human dignity and shed light on segregation and dehumanization, but I was so caught up in my head trying to find ways to address this,” he said.

“Once I met with the UNITE team, I had a spiritual awakening. I started to address them not from my mind or from my heart, but from my spiritual background. It was transformative to understand that in spite of it all, we have to love, we still have to forgive.”

That willingness to forgive also needs to be internal though, he said, noting that his mother was also able to forgive herself for not spending as much time with her sons.

“You can transgress against yourself by not forgiving yourself for some of the things that you haven’t done or some of the time you haven’t spent with your loved ones before they left this Earth. I found that very powerful, to understand how to love and forgive yourself in the midst of turmoil and grief in order to free yourself,” he said.

Unity Is Critical During a Pandemic

Shriver said the pandemic has made the work even more important.

“You can’t solve COVID in an oppositional worldview. One infected person can destroy the entire planet. It’s not an ‘us versus them’ solution,” he said.

The common thread to all the book entries, he said, is that when we treat ourselves, and others with dignity, we unlock potential, even during disagreements. He cited the ABCs set forth by psychologist Rheeda Walker, Ph.D.: Assume you can help, Be a good listener, and Cancel judgment.

“Assume you can help? That’s the old message of service,” he said.

“Be a good listener? That’s the old message of receptivity and compassion. Cancel judgment? That’s the message of forgiveness, from the cross through to the prodigal son,” he said, noting that it’s harder than it may sound.

“Most of us would rather focus on whether or not somebody cut us off at a stop sign because that’s easy. The real work is what Lamont has just described his mother as a role model of, and man, can’t get any bigger than that.”

Shriver is under no delusions about the task ahead. Nearly one in three Americans have broken off a relationship with a loved one, he said, thanks to profound spiritual and political disagreements.

“Someone wrote the other day, ‘Uniting people is not a pussy cat. It’s a tiger.’ This is hard emotional, spiritual, political work. If you want a quick solution, this is the wrong place. But if you want the best solution, there’s only one way, and that’s to unite.”