skip to main content
Return to Fordham University
You are at:Home»Colleges and Schools»Graduate School of Education»GSE Honors Catholic Leaders who Guided Schools through Sandy 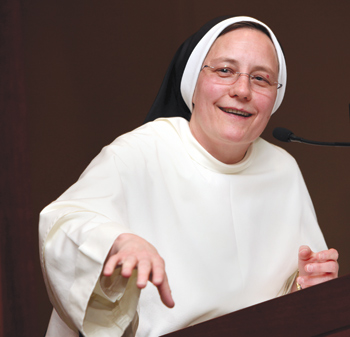 At its 19th annual celebration of New York City Catholic school leaders, the Graduate School of Education (GSE) honored 10 principals who, in the aftermath of Hurricane Sandy, established their schools as places of recovery and healing for their communities.

The annual Catholic School Executive Leadership Dinner on May 14 brought together school leaders from throughout the Archdiocese of New York, the Diocese of Brooklyn, and the Diocese of Rockville Centre to recognize all those who worked to help restore local communities.

“We honor the leaders of those schools who, despite obstacles, helped to reestablish their neighborhoods for families who were devastated by the loss of homes, possessions, and in some cases, as in the Diocese of Brooklyn, the loss of life,” said Gerald Cattaro, Ed.D., executive director of GSE’s Center for Catholic School Leadership and Faith-Based Education.

Materially, emotionally, and spiritually available to students and their families during the crisis, these leaders epitomize the mission of Catholic schools, said keynote speaker John Mary Fleming, O.P., executive director of the U.S. Conference of Catholic Bishops’ Secretariat of Catholic Education.

“Tonight, on behalf of the community, we say thank you for setting the bar high and leading by example, showing heroic leadership in difficult circumstances,” Sister Fleming said.
Their leadership, she said, also points to a greater purpose of Catholic schools in light of the New Evangelization movement, the Church’s comprehensive effort to reach out to members who have become alienated from the faith. Throughout the Church’s history, evangelization has meant spreading the good news of the faith. Schools partake in this mission in an important way, because their members are tasked with teaching the faith to each new generation.

“Catholic schools exist to teach children the dignity of the human being and responsibility to the world in which they live, and to keep the reality of eternal life before their eyes,” Sister Fleming said. “So if evangelization is to foster and create a space for an encounter with Christ, our Catholic schools are uniquely positioned to be centers of the New Evangelization.”

Schools go a step further than merely teaching, she said. Catholic educators embody their schools’ mission, creating a holistic environment that nurtures students intellectually, physically, socially, and spiritually. Community, then, is what sets these schools apart from others.

“Catholic schools are one of the best success stories the Catholic Church in the United States has to tell—and we don’t tell it enough,” she said. “There is something very different happening inside those communities… The sense of family and community in these schools makes them truly special and unique places.”

“[There is] a community of concern composed of faculty, family, and the parish community all united in a desire to pass on and give life to the faith in new generations, and kids pick up on that—they know they’re loved at home, in school, and in the parish,” Father McShane said. “Its lessons are all around you. There is a seamless environment that believes in and rejoices in the faith.”

The event was held on the Lincoln Center campus and hosted by GSE and the Center for Catholic School Leadership and Faith-Based Education. It was sponsored by Pearson, a leading education company.