skip to main content
Return to Fordham University
You are at:Home»Living the Mission»From St. Ignatius of Loyola’s Conversion to Bernstein’s MASS: A Theme of Breaking and Reimagining

In September 1971, when Leonard Bernstein’s MASS debuted, the United States was facing a time of crisis and reckoning. The piece had been commissioned by Jackie Kennedy, the wife of the late President John F. Kennedy, as a way to commemorate her murdered husband, but it also followed the assassinations of his brother Robert Kennedy and Dr. Martin Luther King Jr. At the same time, the country was reeling from the raging Vietnam War, street protests over racial injustice, and the massacre of four college students at Kent State.

Composed by Bernstein, conducted by Maurice Peress, and choreographed by Alvin Ailey, MASS was included in the opening festivities for the John F. Kennedy Center for the Performing Arts in Washington, D.C. Like the times, the musical theater performance was emblematic of a shattering world and worldview that needed to be repaired and renewed, said Stephen Schloesser, S.J., of the Department of History at Loyola University Chicago, speaking at the virtual event “Things Get Broken: A Jesuit Reflection on Leonard Bernstein’s MASS.” That brokenness was similar to what St. Ignatius Loyola was feeling when a cannonball shattered his leg on the battlefield, he told the Fordham audience on Sept. 23. 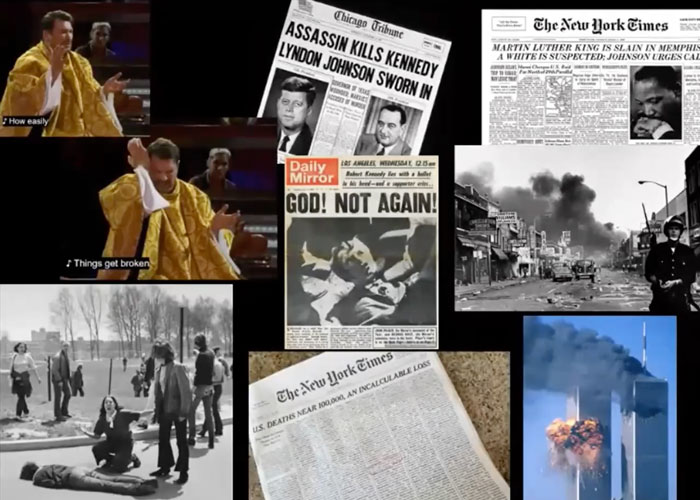 Leonard Bernstein’s MASS was set after the challenges of the 1960s.

The lecture kicked off Fordham’s celebration of the Ignatian Year, a commemoration of the 500th anniversary of the conversion of St. Ignatius of Loyola, the founder of the Society of Jesus.

“It’s a year that recalls the moment 500 years ago, when a cannonball shattered the leg of a Spanish soldier Ignatius of Loyola on the parapets at Pamplona; the wound put an end to Ignatius, his youthful dreams of personal glory, but it started him on a journey of conversion that has by one path or another, led us all here,” said David Gibson, director of the Center on Religion and Culture, which sponsored the event.

Schloesser said those themes of brokenness and renewal were particularly prevalent during one of the key scenes in the performance, when the celebrant takes the monstrance holding the Eucharist and throws it to the ground, breaking it.

“Back in 1971, the breakage in Bernstein’s MASS was intimately connected to the Kennedy assassinations, and the Vietnam War,” he said. “50 years later, we remember other more recent breakages, how easily things get broken.”

Schloesser cited a passage from A Thousand Days by Arthur M. Schlesinger, a historian who served as special assistant to President John F. Kennedy, where Daniel Patrick Moynihan, assistant secretary of labor at the time, was talking about Kennedy’s death with Washington Post reporter Mary McGrory.

Also interwoven throughout the piece was a conflict of appearance vs. reality, particularly in the “climactic crisis,” Schloesser said.

“As the veil is pulled away, trust in appearances collapses,” he said. “This conflict leads to questioning what is real and what is show.”

This also relates to a crisis of faith and a crisis of humanity in that moment in time that Bernstein was trying to evoke throughout MASS, Schloesser said.

“The crisis of faith that he is evoking extends far beyond religious faith of any kind, how easily things get broken,” he said. “This is a cry of the heart, about human existence in general—the assassinations of President Kennedy, Martin Luther King Jr., Bobby Kennedy; the 1970 Kent State shooting, which was just one year before the premiere of MASS.”

Bernstein carried the theme of losing youthfulness and innocence throughout, and that’s how he chose to end MASS, Schloesser said.

“Bernstein celebrates youth regained,” he said, discussing the final scenes. “However, it’s youth with a difference. A youth tempered by the experience of doubt, rage, death—youth has been shattered and broken by a cannonball or an assassination…. Although the world returns, it is not the same world, it is a renewed world.”

David Gibson, of the Center on Religion and Culture and Stephen Schloesser, S.J.

The Ignatian Year, celebrated by Fordham and Jesuit communities throughout the world, encourages that kind of discernment. While recovering at home, Ignatius began reading texts about Jesus and the lives of the saints, as they were the only reading materials available to him at the time. This period of reflection led to his intense spiritual conversion and gave Ignatius a new sense of purpose.

That idea of having our own “cannonball moments” and using them to embark on a new path is a goal for theFordham community throughout the celebration of the Ignatian year.

Some departments, including the Office of Alumni Relations, have embarked on their own ways to mark the year. So far, Alumni Relations has held an event featuring alumni sharing their stories about how Jesuit education impacted their lives. The office is also hosting an Ignatian Year Service Tracker that encourages alumni to serve their communities and track their hours and has been continuing to post Magis Minute video reflections.

The Ignatian Year will conclude on July 31, 2022, the Feast Day of St. Ignatius Loyola.